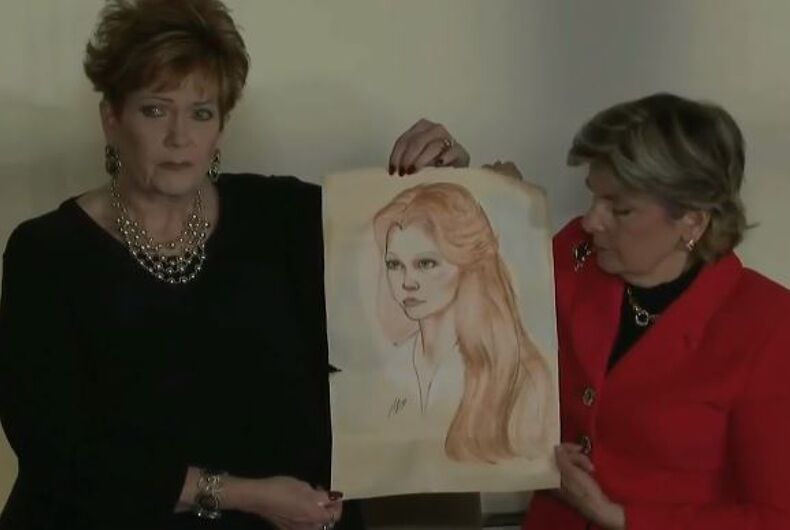 Gloria Allred and Beverly Nelson hold up a portrait of Nelson at age 15, when she said she was sexually assaulted by Roy Moore.Photo: Screenshot/Facebook

The latest woman to accuse Alabama Republican Senate candidate Roy Moore had a harrowing story to tell to the media today, sitting alongside her attorney Gloria Allred.

Beverly Nelson said that when she was 16 years-old she was sexually assaulted by Moore in his car, parked behind the restaurant where she worked.

Nelson recounted that she was waiting for her boyfriend to give her a ride on a cold night. When her boyfriend was late, she said Moore offered her a ride home. Instead of doing so, she alleges, Moore, who was a district attorney at the time, parked behind the restaurant.

“He stopped the car, and he parked his car in between the dumpster and the back of the restaurant,” she said through tears.

“The area was dark and it was deserted. I was alarmed, and I immediately asked him what he was doing. Instead of answering my questions, Mr. Moore reached over and began groping me, putting his hands on my breasts. I tried to open my car door to leave, but he reached over and he locked it so I could not get out,” she continued.

Beverly Nelson details her allegations against Roy Moore: "Mr. Moore reached over and began groping me and putting his hands on my breasts." pic.twitter.com/Utm1diconW

“I tried fighting him off while yelling at him to stop, but instead of stopping, he began squeezing my neck, attempting to force my head onto his crotch. I continued to struggle. I was determined that I was not going to allow him to force me to have sex with him. I was terrified. He was also trying to pull my shirt off,” she said.

Nelson: "I tried fighting him off while yelling at him to stop… I was terrified… I thought that he was going to rape me." pic.twitter.com/A4NZ9zud8Y

“I thought that he was going to rape me. I was twisting, and I was struggling, and I was begging him to stop. I had tears running down my face,” she continued. “At some point he gave up. And then looked at me, and he told me, he said, ‘You’re just a child,’ and he said, ‘I am the District Attorney of Etowah County, and if you tell anyone about this, no one will ever believe you.'”

Beverly Young-Nelson says Moore attacked her and said: "You're just a child and I'm the district attorney… no one will ever believe you" pic.twitter.com/SshFoNXHoJ

“He finally allowed me to open the door, and I either fell out, or he pushed me out,” she claimed. “I was on the ground, as he pulled out of the parking area behind the restaurant. The passenger door was still open, and he burned rubber, pulling away, leaving me laying there on this cold concrete in the dark.”

She said she didn’t tell her boyfriend what happened, because she feared what he might do, saying he had a violent temper.

Nelson said both she and her husband voted for President Trump and that her decision to come forward is not politically motivated.

"My husband and I supported Donald Trump for president. This has nothing whatsoever to do with the Republicans or the Democrats. It has everything to do with Mr. Moore's sexual assault when I was a teenager." pic.twitter.com/wrzCZXAI7p

Moore has denied claims he initiated sexual contact with a 14-year old, Leigh Corfman, when he was in his 30s, as well as those saying he pursued them for “dates” at the time, while they were teenagers. Two, including Corfman, have said that he also supplied them with alcohol, a charge he also denies.

“I did not tell anybody about what had happened,” Nelson said. “I was scared. I felt that if I told anyone that Mr. Moore would do something to me or my family.”

She added that she covered up bruising on her neck with makeup.

Nelson eventually told her sister and mother what she said happened to her. She said she also told her husband.

Allred answered, “No comment” when asked if she has been contacted by other women about Moore, suggesting there may be more allegations to come.

“I am coming forward today to let Mr. Moore know that he no longer has any power over me, and I no longer live in fear of him,” Nelson said through tears.

Beverly Young-Nelson: "I want Mr. Moore to know that he no longer has any power over me, and I no longer live in fear of him." pic.twitter.com/FGFbDAlGIR

Moore has yet to respond to Nelson’s allegations. Allred said that if the Senate doesn’t hold a public hearing on the matter, she will have her client answer questions “in a different public forum.”

Watch the full press conference below.