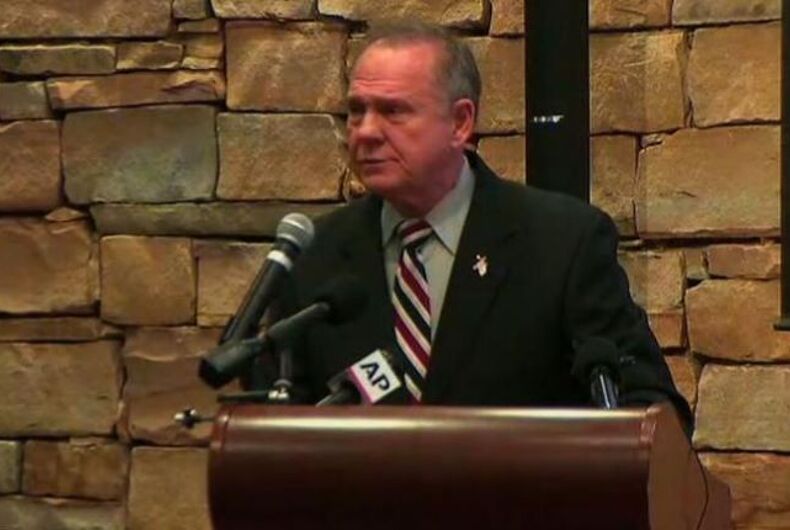 Roy Moore holds a press conference where he threatens to sue The Washington Post for its story on his alleged sexual misconduct with teenage girls. Photo: Screenshot/CNN

Alabama Republican Senate candidate Roy Moore has been hit with a number of allegations of sexual misconduct and assault by women who have said they were teenagers at the time of the incidents.

In an explosive story by The Washington Post, a woman alleged he initiated sexual conduct with her when she was 14. Other women also came forward in that report, saying that when they were between the ages of 16 and 19, they were pursued by Moore. Two have said he provided them with alcohol.

Moore denied the allegations, calling them politically motivated. He is in a neck and neck race against Democrat Doug Jones.

Yesterday, a woman named Beverly Nelson held a press conference where she alleged that when she was 15, Moore sexually assaulted her in the parking lot of a restaurant where she worked.

Banned from the Gadsden Mall?

The New Yorker published an article yesterday that outlines reports of inappropriate behavior by Moore at the Gadsden Mall in the early ’80s. Two of the women in the Post story said they first met the former judge at the mall, and that several other women who used to work there remember him being a frequent presence.

From The New Yorker:

This past weekend, I spoke or messaged with more than a dozen people—including a major political figure in the state—who told me that they had heard, over the years, that Moore had been banned from the mall because he repeatedly badgered teen-age girls. Some say that they heard this at the time, others in the years since. These people include five members of the local legal community, two cops who worked in the town, several people who hung out at the mall in the early eighties, and a number of former mall employees. (A request for comment from the Moore campaign was not answered.) Several of them asked that I leave their names out of this piece. The stories that they say they’ve heard for years have been swirling online in the days since the Postpublished its report. “Sources tell me Moore was actually banned from the Gadsden Mall and the YMCA for his inappropriate behavior of soliciting sex from young girls,” the independent Alabama journalist Glynn Wilson wrote on his Web site on Sunday. (Wilson declined to divulge his sources.) Teresa Jones, a deputy district attorney for Etowah County in the early eighties, told CNN last week that “it was common knowledge that Roy dated high-school girls.” Jones told me that she couldn’t confirm the alleged mall banning, but said, “It’s a rumor I’ve heard for years.”

Two police officers, who wished to remain unnamed, said they had heard about Moore’s unwanted presence at the mall.

“The general knowledge at the time when I moved here was that this guy is a lawyer cruising the mall for high-school dates,” said one.

“I heard from one girl who had to tell the manager of a store at the mall to get Moore to leave her alone,” the other said.

“A friend of mine told me he was banned from there,” he said, adding, “I actually voted for Moore. I liked him at one time. But I’m basically disgusted now, to be honest with you.”

Moore has admitted that during his 30s he “dated a lot of young ladies” after returning home from the military. The age of consent in Alabama, then and now, is 16.

That unnamed officer isn’t the only person backing away from Moore.

Polls show that Jones is gaining, and even opening a small lead on his opponent, and Republican leaders are withdrawing support.

Sens. Mitch McConnell, John McCain, and others have called on him to drop out of the race. Sen. Ted Cruz joined that list yesterday.

“As it stands, I can’t urge the people of Alabama to support a campaign in the face of these charges without serious, persuasive demonstration that the charges are not true,” he told reporters.

Alabamans head to the polls in less than a month for the December 12 election.

Someone shot up an LGBT advocacy group in Oklahoma

Why do so many Christians invoke God to excuse unholy behavior?