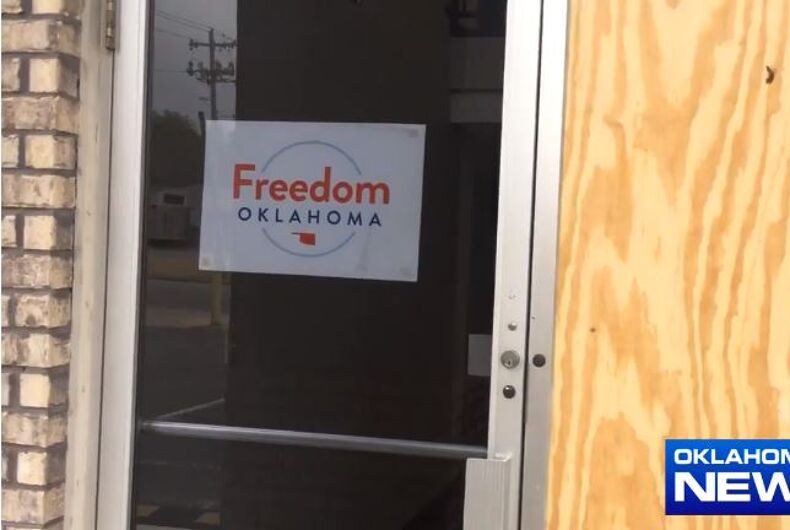 Freedom Oklahoma with a boarded up window where someone opened fire.

Another LGBTQ group reports being targeted in a violent act against its property, possibly meant to threaten the community at large.

Freedom Oklahoma reports that someone opened fire on its building, thankfully when no one was inside.

“When the cleaning crew arrived on Sunday morning they discovered bullet holes from a small caliber weapon across the glass wall which serves at the entrance to Freedom Oklahoma’s office in Oklahoma City,” the group, that said in a statement. “The damage to one panel of glass being so severe that it shattered all over the entryway. This was shocking as the wall is made of reinforced glass designed to serve as the exterior wall.”

“Four other panels were damaged in the incident, with bullet holes still visible. No one was in the building at the time of the shooting. We are working with the Oklahoma City Police Department to determine who was responsible, and to verify their motivation,” the statement continued.

As Freedom Oklahoma notes, similar incidents have occurred against other LGBTQ organizations recently as well, including at Oklahomans for Equality Center in Tulsa, back in March, where 13 shots were fired at the building.

“This is only the latest in a string of attacks on LGBTQ offices around the nation, and just as our colleagues did, we will clean up and continue to march forward. Freedom Oklahoma serves a vital function as Oklahoma’s advocates for the queer community, and we will not be intimidated by cowardly acts of violence aimed at invoking terror in our community,” the organization said.

“This is violence. It’s not acceptable and, no matter what somebody’s differences of opinion, they shouldn’t be shooting up people’s workplaces, or their homes or any of that,” Troy Stevenson, the executive director of Freedom Oklahoma said.

Freedom Oklahoma promises to carry on in its mission no matter the attempts at intimidation.

“We will continue to act with vigilance and without fear.”

But it wasn’t the only building shot up in Oklahoma City.

The Brew Shop OKC, owned by Gail White, was also shot at, resulting in broken glass and aggravation.

“It’s tough because you work hard, small business, try to make a living, and people do senseless things like this and it’s aggravating,” White said.

Police are investigating the incidents.

Meet the white transgender person who says they are also ‘transracial’

Report: Roy Moore was banned from the local mall for badgering teenage girls