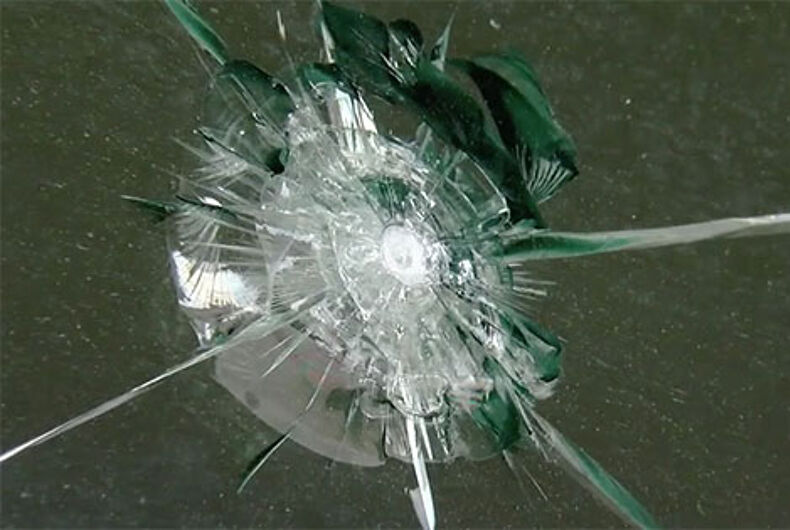 Police in Tulsa, Okla., are investigating two incidents within one day at an LGBTQ center in Tulsa, Oklahoma, including more than a dozen pellet rounds fired at the building’s window and door.

Tulsa World reported surveillance video captured a brief glimpse of the truck driven by the person who fired several shots from a pellet gun at the entrance of the Dennis R. Neill Equality Center, about 12:20 a.m. Monday. Officials at the center posted the video on Facebook.

Not even eight hours later, Tulsa World reported a man walked into the lobby of the center, yelling profanities and anti-LGBTQ rhetoric at front-desk staff.

Fortunately, none of the pellets penetrated the reinforced window, said Toby Jenkins, the center’s executive director. Jenkins said the downtown building had not been the target of a serious act of vandalism since Oklahomans for Equality moved in 12 years ago.

“I am sickened, yet not surprised, by the bullet holes that now riddle the front of the Dennis R. Neill Equality Center,” said Geoffrey Brewster, board president of Oklahomans for Equality. “They are the latest reminder of the deep-seated hatred some individuals have towards the LGBTQ community. Oklahomans for Equality condemns every act of hatred and violence perpetrated against any individual or group based upon difference. We are keenly aware after an event such as this, or the Pulse Night Club shooting in Orlando, Fla., that sexual orientation and gender identity are not protected classes in current hate crime legislation. Even though hatred of difference is the motivation for such acts, our community is not equally protected under the law. This must change, and we call on our community and our allies to demand it.”

KJRH reported on the shooting. “We’re fortunate we’re not covering a murder,” one of the center’s workers said to a reporter.

The second incident, while causing no damage, rattled nerves. “I wish you would all die,” said a man who was buzzed-in to the lobby, according to Jenkins.

The man said he was a veteran who had “fought for your rights” and that he wished that he hadn’t, Jenkins added.

“It was so brazen, I thought it was a joke,” Jenkins told Tulsa World. “I didn’t know him, but then I realized he was serious.”

Jenkins started moving toward the man, and he quickly left, but not before flipping off the staff as he drove away, Jenkins said.