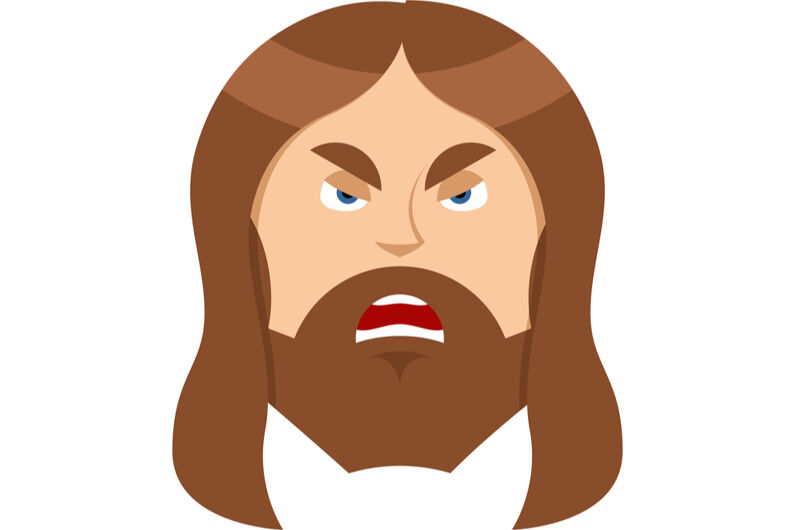 Jesus loves me, but he can't stand youPhoto: Shutterstock

“Take Joseph and Mary. Mary was a teenager and Joseph was an adult carpenter. They became parents of Jesus.” –Jim Ziegler, Alabama state auditor

“The allegations against Roy Moore are not true, not true at all….[My brother is being persecuted] like Jesus Christ was.” –Jerry Moore told CNN

Religion and its perversely distorted interpretations by individuals, groups, and full denominations throughout the ages have been devoted to justifying the most unimaginable and extreme forms of oppression against other human beings and against our environment.

We see not only so-called “religious” covers used to defend Judge Roy Moore against allegations of sexually assaulting a 14-year-old girl when he was in his 30s, but Moore himself rationalized breaking his oath to protect and defend the Constitution of the United States as Chief Justice of the Alabama Supreme Court on religious grounds.

He invoked Biblical texts when he imposed a large stone slab of the Ten Commandments on the publicly-owned courthouse grounds, and when he urged all Alabama judges to defy the U.S. Supreme Court’s ruling to ensure marriage equality for same-sex couples.

I find it more (pun intended) than ironic that Moore justified his opposition to marriage equality by supposedly defending children from “an inherent evil” by calling for the seizure of the children of gay and lesbian people and sending the parents to prison. He argued that children must not be “raised in unnatural families that contradict the created order.”

Moore and his supporters (colluders), however, speak as only the latest crusaders from the perennial crop blasting their bigotry and oppression from a distorted religious megaphone. For example, Hans Fiene, in his recent editorial, “When the Saints of First Baptist Church Were Murdered, God Was Answering Their Prayers,” in the conservative, The Federalist, he asserted that the victims of the church shooting are now righteous martyrs of God in virtually similar terms as radical Jihadist terrorist martyrs:

Sometimes, God’s will is done by allowing temporal evil to be the means through which he delivers us from eternal evil….Just like those who put Christ to death, and just like those who have brought violence to believers in every generation, this man only succeeded in being the means through which God delivered his children from this evil world into an eternity of righteousness and peace.”

Another Alabaman, Robert Bentley, in his first address after taking the oath of office for Alabama Governor in January 2011, argued, “So anybody here today who has not accepted Jesus Christ as their savior, I’m telling you, you’re not my brother and you’re not my sister, and I want to be your brother.”

Bentley was later charged with engaging in an adulterous affair with a female staffer. He was later forced to resign before impeachment proceedings after being charged with two counts of violating state campaign laws.

The issue of slavery became a lightning rod in the 1840s among members of the Baptist General Convention, and in May 1845, 310 delegates from the Southern states convened in Augusta, Georgia to organize a separate Southern Baptist Convention (on a pro-slavery plank). They asserted that to be a “good Christian,” one had to support the institution of slavery, and could not join the ranks of the abolitionists.

The doctrine of “manifest destiny” embraced a belief in American Anglo-Saxon superiority. “This continent,” a congressman declared, “was intended by Providence as a vast theatre on which to work out the grand experiment of Republican government, under the auspices of the Anglo-Saxon race.”

Robert Lewis Dabney, professor of theology at Union Seminary in Virginia, argued: “What then, in the next place, will be the effect of this fundamental change when it shall be established? The obvious answer is, that it will destroy Christianity and civilization in America.”

Dabney, who lived from 1820-1898, in his dire warnings referred to women’s suffrage. Dabney used religious arguments to maintain patriarchal domination, privilege, and power over the rights of all women.

Let us look at another parallel case, the issue of prohibiting individuals from different “races” from engaging in sexual relations (miscegenation). The state of Virginia in 1958 arrested and tried a white man and black women for violating Virginia’s anti-miscegenation statute, its so-called “Racial Integrity Act” of 1924.

The plaintiffs in the case were Mildred Loving (born Mildred Deloris Jetter, a woman of African descent) and Richard Perry Loving (a man of white European descent), both residents of Virginia who married in June 1958 in the District of Columbia to evade Virginia’s restrictive statute. Upon returning to Virginia, police stormed their home and bedroom, arrested, and charged them with violating the law.

At their trial, the judge convicted and sentenced them each to one year imprisonment, but suspended their sentences on the condition that the couple leaves the state of Virginia for a period of 25 years. At the trial, the judge, Leon Bazile, used Biblical justifications for his verdict.

Almighty God created the races white, black, yellow, Malay, and red, and He placed them on separate continents. And but for the interference with His arrangement, there would be no cause for such marriages. The fact that He separated the races shows that He did not intend for the races to mix.”

Regarding its stands on women in the Church, the Southern Baptist Convention, at their 1998 session, declared that a wife should “submit herself graciously” to her husband’s guidance, and the denomination has since removed women from top executive posts.

According to the 1998 resolution: “…The marriage relationship models the way God relates to His people. A husband is to love his wife as Christ loved the church. He has the God-given responsibility to provide for, to protect, and to lead his family. A wife is to submit herself graciously to the servant leadership of her husband even as the church willingly submits to the headship of Christ….[She] has the God-given responsibility to respect her husband and to serve as his helper in managing the household and nurturing the next generation.”

In 2010, the SBC passed its “Resolution on Homosexuality and the United States Military,” which stated in part, “RESOLVED, That the messengers to the Southern Baptist Convention…affirm the Bible’s declaration that homosexual behavior is intrinsically disordered and sinful, and we also affirm the Bible’s promise of forgiveness, change, and eternal life to all sinners (including those engaged in homosexual sin) who repent of sin and trust in the saving power of Jesus Christ (1 Corinthians 6:9-11).”

Alexis de Tocqueville, French political scientist and diplomat, who traveled across the United States for nine months between 1831-1832 conducting research for his epic work, Democracy in America (1840). He was astounded to find a certain paradox: on one hand, he observed that the United States promoted itself around the world as a country separating “church and state,” where religious freedom and tolerance were among its defining tenets, but on the other hand, he witnessed that:

There is no country in the world where the Christian religion retains a greater influence over the souls of men than in America.”

While the government was not supporting Christian denominations and churches, per se, religion to Tocqueville should be considered as the first of their political institutions since he observed the enormous influence churches had on the political process. Though he favored U.S. style democracy, he found its major limitation to be in its stifling of independent thought and independent beliefs.

I want to be very clear that Christianity comprises many sects and denominations in places throughout the world, and, therefore, Christianity cannot be understood as monolithic, for people adhere to or diverge from a strict interpretation of scriptures depending on their denomination and personal beliefs. Some denominations have been welcoming and have been on the forefront of progressive social change efforts

In addition, anyone can believe anything they wish, whether others find those beliefs laudable or offensive. When, however, the expression of those beliefs denies other individuals or groups their full human and civil rights, a critical line has been crossed, for they have entered the realm of oppression.

We are seeing individuals and entire denominations framing themselves as the true victims whenever we challenge their religious justifications in their attempts to perpetuate their already pervasive Christian hegemony and social privileges, and their characterizations of others.

Report: Roy Moore was banned from the local mall for badgering teenage girls