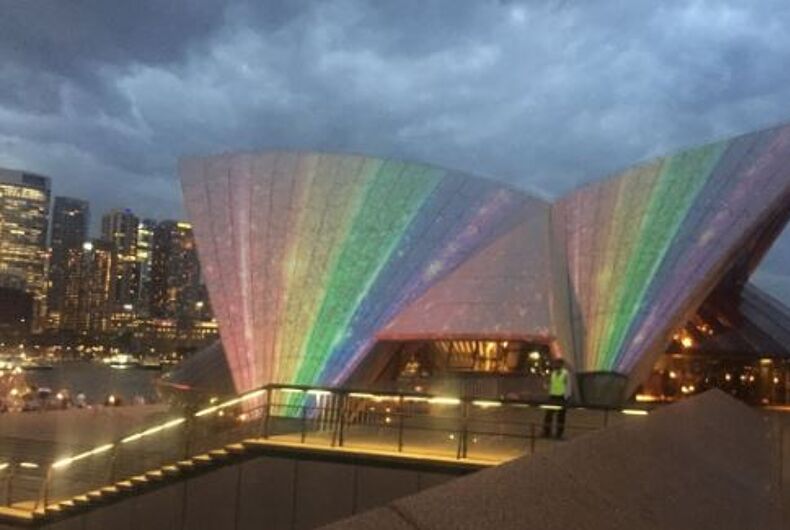 The Sydney Opera House lit up in rainbow colors in celebration of an upcoming LGBTQ event and thousands were there to witness the proud sight.

The festivities were a part of the official launch program for the upcoming 2018 Sydney Gay and Lesbian Mardi Gras, a 17 day event culminating in a parade on March 3.

Organizers are celebrating the 40th anniversary with 17 days of events, entertainment, parties, performances, and exhibitions.

The event is one of the biggest LGBTQ celebrations in the world, and this year is likely to set a new standard.

“The 40th anniversary Parade looks set to be the best yet, with a sparkling procession of hundreds of jawdropping floats and 12,000 revellers will dance till dawn at the Mardi Gras Party, Australia’s biggest LGBTQI party of the year,” said Mardi Gras Creative Director, Greg Clarke.

The event started in June of 1978, when a group of gay and lesbian activists took to the streets to protest the illegality of homosexuality. They were met with police violence and arrest, and when their names were published in the newspaper the next day, many lost their jobs.

The New South Wales government, the police, and the Sydney Morning Herald all apologized to those individuals, known as the 78er, Gay Star News reports.

Australians will soon find out how the country voted in its non-binding postal survey on marriage equality, with results due back on November 15. Parliament could legalize same-sex marriage if a majority of its citizens show they are in favor, but there is no guarantee.

Pence may be a lapdog, but he’s wagging Trump’s tail