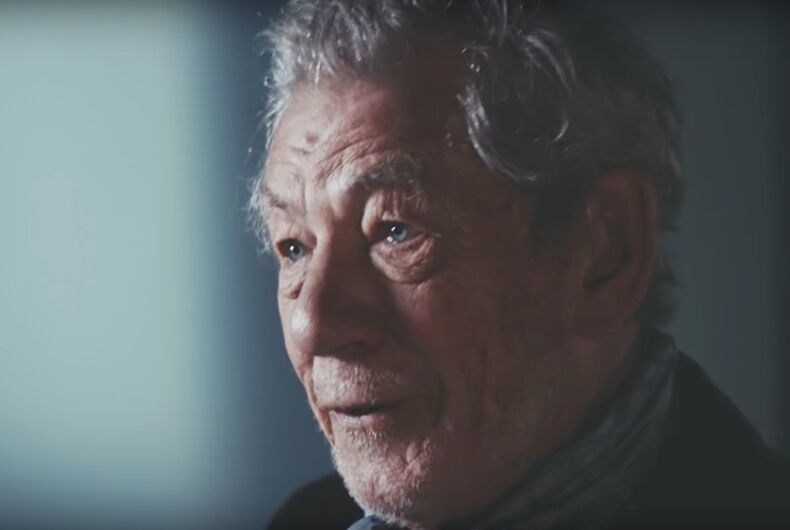 Ian McKellen has said that he hopes to be remembered more for his LGBTQ rights activism than his acting.

McKellen, who is currently promoting the new documentary about his life, McKellen: Playing the Part, told The Hollywood Reporter that while acting styles comes and go, fighting on the right side of history never looks out of fashion.

That activism includes fighting against England’s Section 28 law, prohibiting the so-called “promotion” of homosexuality by authorities or at public schools. It was repealed in 2000. The law, as McKellen notes, is similar to one currently in effect in Russia.

“And then when I go outside the U.K., particularly to Africa, but other places too, those laws, which ironically the British Empire left behind, disadvantage gay people and others, in India for example,” he said.

“So I do quite a bit of journeying and saying sorry, sorry we left those laws behind and please get rid of them because there are a lot of gay men and women in India and China where I’ve been recently, and Russia where the laws are particularly bad.”

“I’m very proud of my small contributions to changing the law in this country and changing attitudes, all for the better, and I suppose in the scheme of things that is more important and the more merit and longer lasting than any acting that I have done,” he said.

He added that this is already happening.

“I would say that half of the letters I get or half of the meetings with strangers I get will mention gay activism and say thank you for it,” he told the publication.

The actor, most famous for his roles in the X-Men and Lord of the Rings franchises, came out in 1988.

“That’s been the wonderful thing about coming out,” he said. “I feel I’ve joined the human race and people are happy to talk to me about it.”

Related: To Sir Ian McKellen, life as a closeted gay man was ‘a terrible opression’

And while his new documentary is all about looking back, he is staying looking ahead. In edition to the documentary, you can hear him voicing a character in the new animated film Animal Crackers.

He is also focused on the work that still needs to be done for LGBTQ people across the globe.

“There is a lot of work still to be done across the world. And that doesn’t include transgender problems, so, it goes on,” he said of his activism work.

What would happen if all the LGBTQ healthcare workers called in sick?