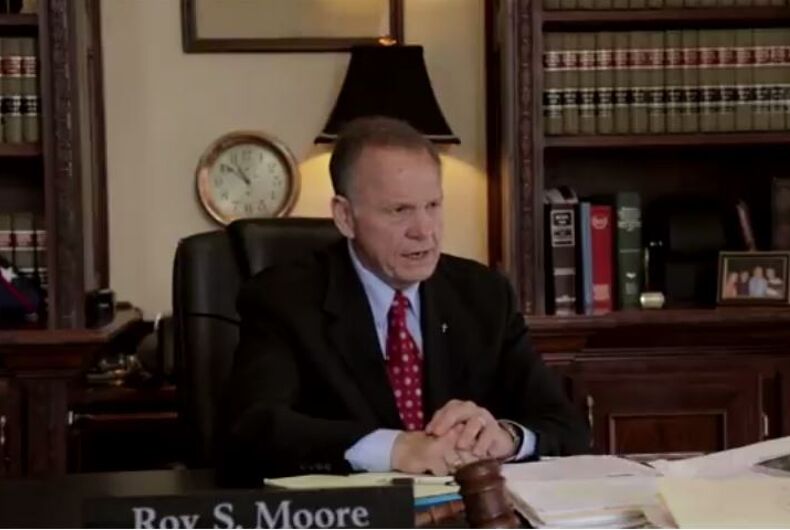 Alabama Senate candidate Roy Moore, who has the backing of President Trump, shared an article on his Facebook page in praise of Russia’s anti-gay campaign.

Russia banned so-called “gay propaganda” in 2013, with a law that has been used to crackdown on the LGBTQ community. It was condemned by the European Court of Human Rights this year, ruling it was a discriminatory violation of free speech.

“The article highlighted efforts by some Russians to counter a feature on Facebook that allowed users to overlay a rainbow over their profile picture,” CNN’s KFile reports.

The article praises the “propaganda” law as “strong stance in defense of traditional family values.”

Moore’s page also shared a post claiming LGBTQ people are to blame for the hate crimes inflicted upon them.

News about the FDA ending the lifetime ban on gay and bisexual men from donating blood was shared with the caption, “Really??!!”

Moore also objected to Huntsville’s gay pride parade, asking in a voice one can only imagine as shrieking, “Where is the out cry [sic]?? Mayor? Pastors? God’s chosen??”

Side note, God needs assistance shutting down a little old pride parade, and yet still isn’t able to do it? Omnipotent? Sounds more like impotent.

He also took aim at his political opponents, dismissively referring to Alabama’s first openly gay elected official a “lesbian liberal legislator,” and going after a drag queen that dared to criticize him.

Moore, or someone from his campaign, also made posts calling Obama a Muslim, criticizing those who kneel during the National Anthem in protest of police brutality and racism, as well as a number of posts attacking immigrants.

The Republican candidate has previously said he agrees with Russian President Vladimir Putin on LGBTQ issues, refused to adhere to the Supreme Court ruling legalizing marriage equality nationwide, and has said that homosexuality should be illegal.

While the Trump administration continues to attack LGBTQ rights, most recently with the DOJ stating it will no longer stand on the side of LGBTQ workers who are discriminated against, the White House has tried to distance itself from Moore’s views nonetheless.

“I have not taken a deep dive on every comment that the Senate nominee has made,” Sanders told reporters. “But I certainly know where the president stands on those issues, and wouldn’t see any parallel between the two of them on that front.”

Oprah & Ellen caused mayhem when they went grocery shopping together