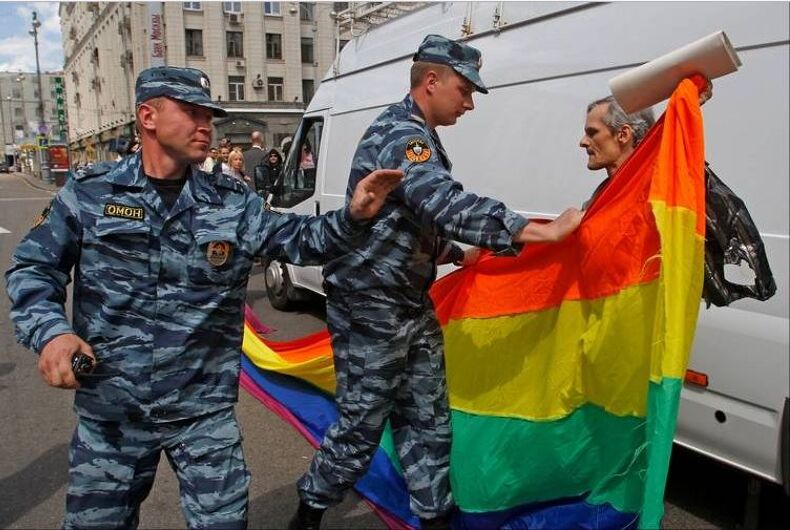 Europe’s highest human rights court ruled on Tuesday that Russia’s “gay propaganda law” prohibiting the promotion of homosexuality is discriminatory and a violation of freedom of expression.

The law, signed by Russian president Vladimir Putin in 2013, ostensibly prohibits the promotion of homosexuality to minors, and has been used to stop LGBTQ pride demonstrations, as well as to go after and jail activists.

The European Court of Human Rights ruled that it breached European treaty rules. It ordered Russia to pay the men a total of 43,000 euros, or $48,000, in damages in a binding ruling.

“The Court found in particular that, although the laws in question aimed primarily at protecting minors, the limits of those laws had not been clearly defined and their application had been arbitrary,” the Strasbourg-based court said in a statement.

“Indeed, by adopting such laws, the authorities had reinforced stigma and prejudice and encouraged homophobia, which was incompatible with the values of a democratic society.”

The court, in its ruling in favor of three gay activists who staged protests from 2009 to 2012 — Nikolai Bayev, Aleksei Kiselev, and Nikolai Alekseyev — also said the law “served no legitimate public interest.”

Russian authorities are already saying they will appeal the “unjust ruling.”

The Russian Justice Ministry said in a statement that the law was designed “to defend morality and children’s health” and did not amount to a ban on, or condemnation of, homosexuality.

Alekseyev said he planned to use the “historic victory” to urge Russian authorities to do away with the law.

“The way this law has been applied shows that it is not aimed at protecting minors, but at removing LGBT people, an enormous social group, from the public space, and at stripping them of their right to speak out or fight for their rights,” he added.

As Reuters notes, this is not the first time Russia has found itself on the wrong side of one of the court’s ruling.

Last year alone it found that Russia had violated the European Convention on Human Rights in all but six of its 228 judgments in cases involving the country.