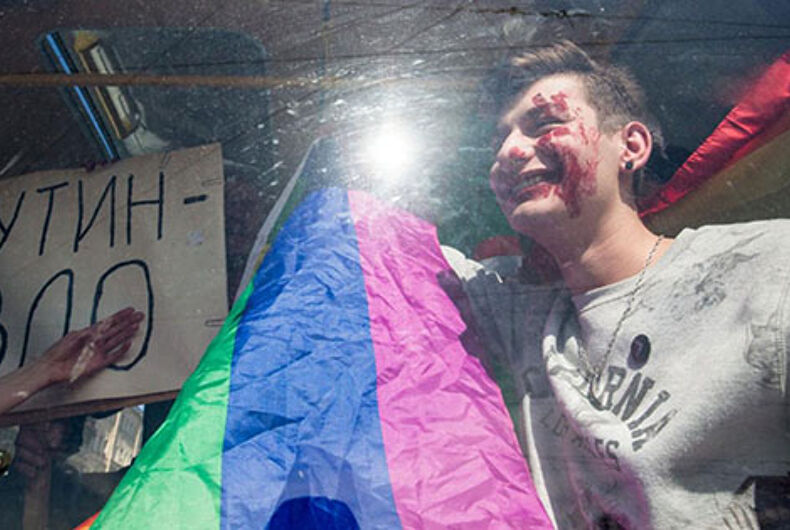 Russian police dragged away demonstrators who staged a nonviolent protest of the detention of gay men in Chechnya on Monday, as part of the worldwide celebration of May Day.

The LGBTQ activists covered themselves in fake blood, draped Chechen and rainbow flags over their bodies and pretended to be dead as they lay in the street of St. Petersburg. Photographs of their protest circulated on Twitter.

A Rainbow May Day in Petersburg vs. The Dead in Chechnya https://t.co/Ysv8ZHS8rC pic.twitter.com/yEOEvf4s3X

There were about ten demonstrators, all forcibly removed by the authorities and detained for more than six hours. The protesters were trying to raise awareness of the detentions of more than 100 gay men and men thought to be gay who were tortured for information about who they knew in the LGBTQ community. At least three were killed, according to Novaya Gazeta, Russia’s leading investigative newspaper.

Police also detained another group of protesters, who held placards demanding Chechen leader Ramzan Kadyrov be tried at the International Court of Justice. Kadyrov has both denied the existence of gays in Chechnya and vowed to exterminate all of them by the end of Ramadan.

Worldwide outrage over reports of the concentration camp-like detentions sparked an investigation by the Kremlin, which not surprisingly turned up absolutely nothing. Meanwhile, that Russian newspaper which broke the original story of these detentions, torture and killings of gay men reported last week four more of these prisons have been identified within Chechnya.