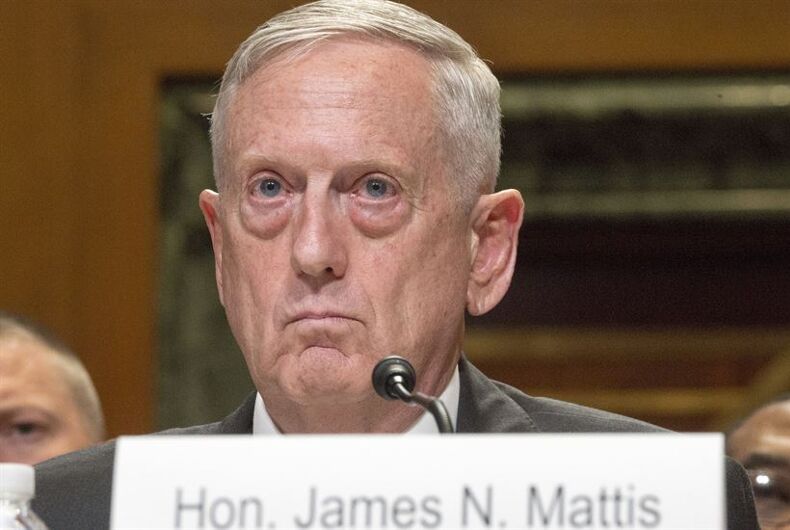 Questions still abound over how Trump's transgender military ban will be handled, with General James Mattis at the center of the confusion and controversy. Photo: DoD photo by Navy Petty Officer 2nd Class Dominique A. Pineiro

The ban on transgender soldiers in the military has been a disaster from the beginning. Even the Republicans pushing President Trump to stop covering trans related health care costs didn’t ask him to go so far as to institute a ban, and numerous generals have come out against it. So too has the Coast Guard Commandant.

What started as a tweet from Trump while Defense Secretary James Mattis was on vacation is now official policy.

That doesn’t mean the confusion is over, as reports have come out that Mattis has enacted a freeze on the policy so that transgender soldiers can continue to serve pending a “study by experts.”

“Once the panel reports its recommendations and following my consultation with the secretary of Homeland Security, I will provide my advice to the president concerning implementation of his policy direction,” Mattis said in the statement. “In the interim, current policy with respect to currently serving members will remain in place.”

Mattis’ move buys time for the Pentagon to determine how and if it will allow thousands of transgender troops to continue to serve, whether they will receive medical treatment, or how they will be discharged.

The Los Angeles Blade tips its hat to the confusion at the end of their article, quoting the ACLU’s Chris Strangio saying, “I do [think] this headline and article overstate what is happening here. Surgeries are still being being cancelled and reenlistments denied.”

The ACLU is suing the Trump administration over the ban, as are Lambda Legal and OutServe.

The USA Today story is grossly misleading. Secretary Mattis did not make a decision to “buy time” or to “freeze” the current policy. The President’s August 25, 2017 Memorandum expressly provides that the new ban does not go into effect until March 23, 2018 and expressly states that no one can be discharged for being transgender in the meantime. There is nothing new at all here, and suggesting otherwise is terribly misleading.

This inaccurate reporting is playing into a patently bogus strategy to make it appear that there is going to be some new “study” that will legitimate what is already a forgone conclusion: the discriminatory banning of military service by transgender people, based on a characteristic that has no bearing on their fitness to serve. The August 25 Memorandum is perfectly clear: President Trump has ordered the military to ban transgender people from serving. That ban will go into effect in about 7 months, on March 23. That appalling decision is not (and cannot possibly be, given its timing) based on any hastily assembled, post hoc “study” that is being cooked up now in a transparent effort to provide a retroactive fig leaf for the President’s bigotry. This order is an act of pure animus toward transgender people. The military spent two years carefully reviewing all of the relevant evidence on this issue and concluded that there is no reason to exclude transgender people from military service. The cost of inclusion is literally negligible, and there is no evidence that permitting open service will have any negative impact on military readiness. The notion that there is any good faith “study” being conducted is a blatant pretext for unmitigated, vicious, baseless discrimination.

More than ever, we need reporters to fact check these stories and not simply repeat false information that is being used to set up an attempted cover for one of the most shocking acts of official discrimination the transgender community has ever experienced.

There is no new “freeze.” This is just what the August 25 ordered—along with a permanent ban on enlistment, effective now, and a new ban on open service, effective on March 23, 2018.

Will Ivanka & Jared be the next White House casualties?