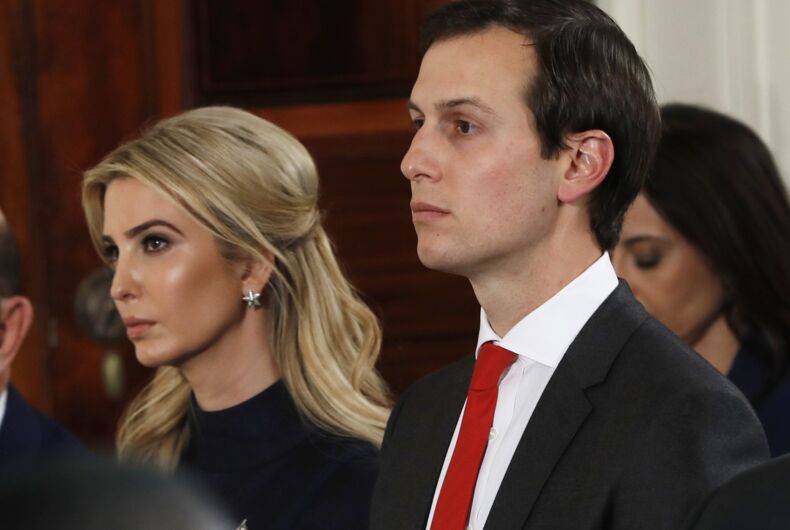 In the past seven months, pretty much all of Trump’s once-trusted top advisers have either quit or been fired. The list includes Steve Bannon, Reince Priebus, Sebastian Gorka, Sean Spicer, and Anthony “the Mooch” Scaramucci.

Oh, and let’s not forget James Comey. And those 46 Obama-era prosecutors. And pretty much the entire State Department.

Is there anyone else we’re forgetting? Probably.

Now, rumors are swirling that Trump’s own daughter, Ivanka, and her husband, Jared, are on their way out too.

According to a bombshell report published by Vanity Fair, the couple has begun quietly plotting their exit strategy and may even move out of Washington, D.C. before the end of the 2018 school year.

Increasingly you hear chatter in Washington that Jared and Ivanka won’t last, not because they are at risk of being pushed out, but because they will save themselves from a damaged White House. Neither has committed to staying the duration of the Trump presidency, which both must realize may well be cut short.

Ellison says Jared and Ivanka, who White House staffers purportedly call “princess royal” behind her back, don’t quite understand “how to behave” among Washington elites.

Unlike in the posh New York social scene, where they feel celebrated and beloved where ever they go, folks in D.C. don’t really give a shit about them, which has caused severe damage to their self-esteem.

Ellison writes: “Most such people take a seat a little off to the side, at least until they get their bearings. ‘What is off-putting about them is they do not grasp their essential irrelevance,’ this veteran told me. ‘They think they are special.’”

On top of that, they’ve also failed to live up to expectations that they would/could guide Trump into making sane and normal decisions.

Any masquerade that Kushner and Ivanka could maintain that they were moderating influences in the White House flew out the window the moment Trump waved his hand and said that there were ‘many sides’ to the Charlottesville violence. If [Ivanka’s] main value in Washington is her access to her father and she is unable to sway him, then she is simply a 35-year-old former real-estate and retail executive in over her head.

Ellison says Ivanka and Jared are now focused on saving the last shreds of their reputations, “at least in the kind of society they have enjoyed for much of their young lives—the precincts of Upper East Side socialites for Ivanka and high-society New Jersey for Kushner.”

“They are still trying to salvage what they can.”