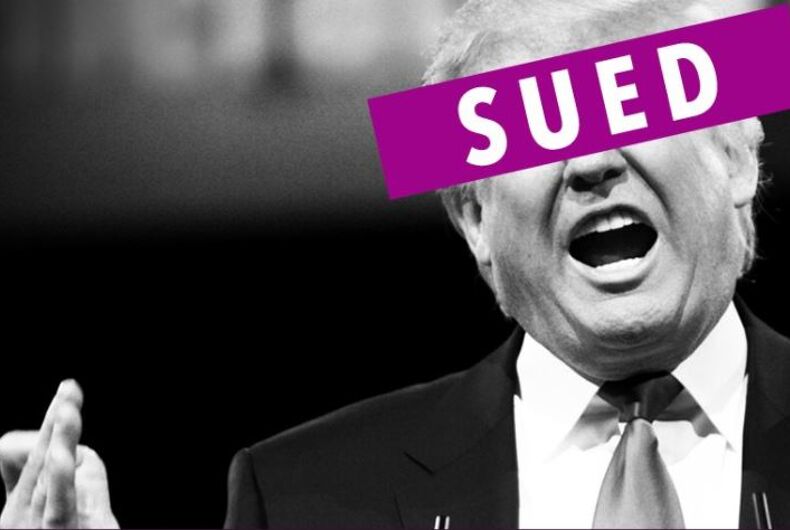 The Trump administration was hit with two lawsuits today over the transgender military ban it made good on after the president tweeted out that transgender individuals were too costly and distracting to serve.

Lambda Legal and OutServe joined forces, along with the Human Rights Campaign and Gender Justice League, on behalf of transgender individuals who wish to serve in the military or are already serving.

BREAKING: We just sued @realDonaldTrump over his #TransMilitaryBan. See you in court, Mr. President. #LGBTQ pic.twitter.com/eo8wT4XtQO

ACLU has filed its lawsuit on behalf of six transgender service members.

The ban is based on uninformed speculation, myths and stereotypes, and a desire to harm transgender people. #TransMilitaryBan

“Every justification that the president has offered in support of the ban has already been thoroughly reviewed and debunked by the Department of Defense itself when it adopted a policy permitting military service by transgender individuals last year,” ACLU’s Chase Strangio said in a statement.

“Military, medical and legal experts have concluded that allowing open service by transgender individuals, many of whom have been serving in silence for years, does not disrupt military readiness or unit cohesion and imposes negligible costs,” Strangio continued. “By contrast, barring transgender individuals from joining the military and discharging those who are already serving is exceedingly costly and undermines national security and military readiness.”

“This ban not only wrongfully prevents patriotic, talented Americans from serving, it also compromises the safety and security of our country,” Lambda Legal Senior Attorney Peter Renn said.

“Thousands of current service members are transgender, and many have been serving openly, courageously and successfully in the U.S. military for more than a year — not to mention the previous decades when many were forced to serve in silence,” Renn added. “Once again attacking a vulnerable population based on bias, political opportunism and demonstrably untrue ‘alternative facts,’ President Trump is denying brave men and women the opportunity to serve our country without any legitimate justification whatsoever.”

“We promised that we would sue if the president took this action. The law is on our side; justice is on our side,” said Peter Perkowski, Legal Director for OutServe-SLDN. “And we are on the side of every single transgender service member and those who want to serve. The nation’s courts exist to protect the people whom tyrants would otherwise abuse. Trump can’t tweet his way out of this one.”

“Our military is stronger when any qualified American willing to defend our country is able to serve, regardless of their gender identity,” said HRC National Press Secretary Sarah McBride. “It is an unconscionable and unconstitutional breach of trust for the president to single out brave transgender service members and able recruits for discrimination. The harm that this administration is causing to both these courageous Americans and our national security must be stopped. We are proud to be a plaintiff on behalf of our transgender members currently serving or wishing to enlist or commission, but who find their careers and their future under attack – and we thank all of the plaintiffs, Lambda Legal and Outserve-SLDN for their leadership in challenging this dangerous directive.”

“Gender Justice League has been fighting on behalf of transgender people for the dignity that all people deserve. At a time when transgender people are facing alarming rates of discrimination, violence and lack of access to housing and medical care, this blatantly discriminatory ban is a slap in the face to our members,” said Danni Askini, Executive Director of Gender Justice League. “We have made strides in Washington state to put this kind of government sanctioned discrimination behind us. This ban stands against our state’s values that all Washingtonians deserve the same rights and freedoms guaranteed under the Constitution.”