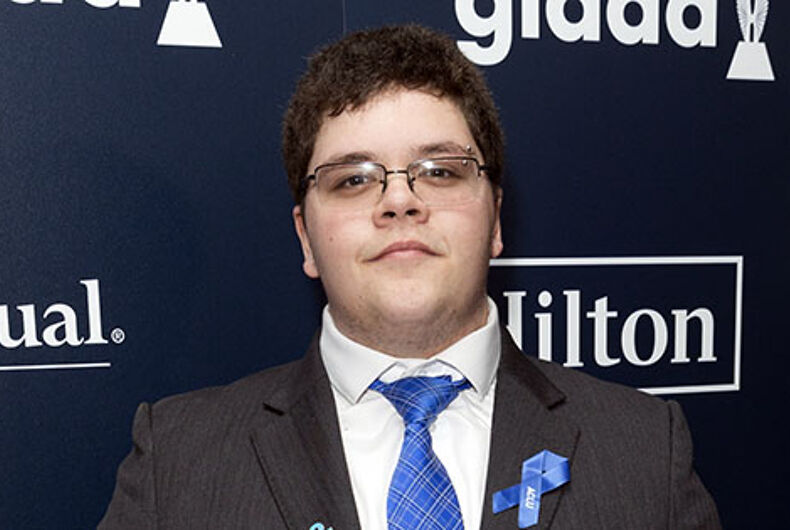 Gavin Grimm — the transgender teenager who is fighting for the right to use the boys’ room at his high school, even though he graduated this summer — tells LGBTQ Nation he has decided it’s time to live on his own, as his own man.

Where he goes, however, is very much up in the air, including how far it will be from conservative, rural Gloucester, Virginia, where the school board refuses to concede he should have been treated like every other boy.

Grimm called LGBTQ Nation before making an address Thursday to the American Federation of Teachers’ biennial TEACH convention at the Marriott Wardman in Washington, D.C.

In our wide-ranging phone interview, he talked about his love life, his music and movie favorites, as well as being thrust into the limelight as a transgender boy, now a man hunting for a new home and then headed to college. And Grimm revealed that he’s optimistic about the future for trans rights.

Grimm and I first met at the premiere of Katie Couric’s National Geographic special, Gender Revolution, and after reminiscing about his red carpet experience at the GLAAD Media Awards in New York City in May, our conversation turned to his ongoing court battle.

In less than two months, his lawyers from the American Civil Liberties Union will present their case in the 4th U.S. Circuit Court of Appeals, arguing that the school board policy barring him from using the boys bathroom is illegal and still discriminates against him whenever he visits the school as an alumnus.

Dawn Ennis: So, tell me where we are right now in your case.

Gavin Grimm: Right now we are getting ready for opening arguments on September the 12th.

DE: And what are you doing to help your team? Is this part of it? Or are you basically allowing them to do all the, you know, dot the I’s and cross the T’s, and things like that?

GG: Well, I’m doing things like this. For my part, that’s my role in this, to get the word out about my story before we go to court. They do the legal things. But I take on speaking engagements to help spread awareness and education about what trans youth are and what their needs are. So that’s my role in this.

Dealing with Fame and Facing the Future

DE: Are you being put in a position of being a transgender spokesperson or are you feeling that this is something that you want to be, an advocate for trans men and all trans people?

GG: Both, really. Because on one hand, I didn’t intend to step out on the activist platform. I didn’t want to be in the public eye. I didn’t want to have anything that I have now as far as the notoriety or the platform, really. But that’s what I got. And from there it was my decision to continue as I have, with the activism that I’ve done, the speaking engagements I’ve done, the interviews I’ve done. From that point on those were my decisions.

DE:  That very first time you spoke before the school board, I could just see in your face that, as confident as you were, that was a terrifying moment. Can you tell me a little bit about how you felt that day? How you decided, ‘Well I’m going to have to speak up,’ especially knowing that you were speaking as a sole voice against so many bigots.

GG: I was sure that no one was going to do it for me. You know? I figured if I didn’t, no one would. And that really was the case: pretty much everyone spoke against me at those meetings, aside from family and friends that I brought along, myself. I thought if I could appeal to the rational, maybe shoot down some of the more ridiculous arguments, that it would have landed well enough to have some critical thinking happen, right?

But I ended up speaking differently than I had initially planned, and speaking from, I think, emotions, and trying to appeal to that side of things, because I saw the room had no logic whatsoever, and said that was going to be a fruitless conversation. Appealing to emotion was something that I felt would be more effective, and of course we know what happened next.

DE: As far as what happens next in court. I imagine this is not the venue you wanted. I know that the Supreme Court turned your case aside because of the Trump administration’s decision to rescind the Obama-era guidance to schools on trans students. What was your feeling in terms of what happened with the Supreme Court?

GG: I was disappointed and frustrated, but I remain as eager as ever to continue with whatever that meant for me at that point. You know, whatever the next step was.

Man sues Congress members over pride flags, claiming being gay is a religion