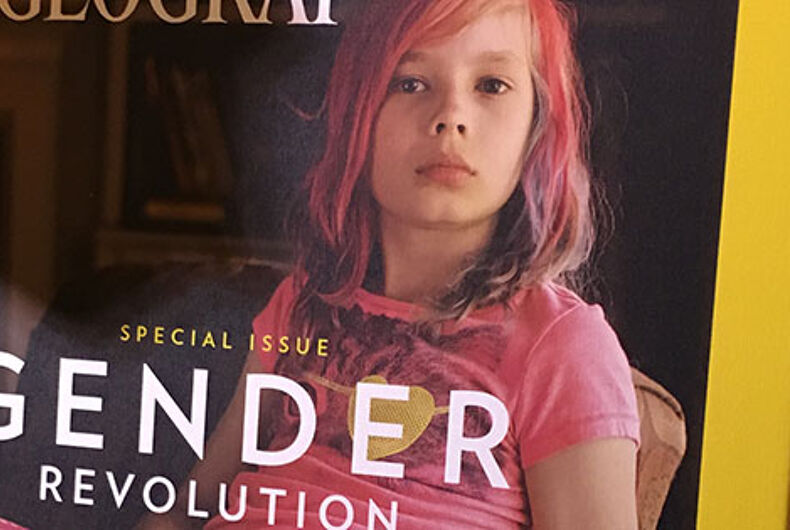 There is not much new under the sun when it comes to television documentaries about transgender Americans. Trans journalist Gwen Smith and writer Brynn Tannehill frequently joke that these features are typically so full of tropes, that if one were to have a drinking game, downing a shot every time someone said “journey” or the like, you’d be plotzed before the end titles.

So it should come as no surprise that trans viewers of a new, comprehensive production, hosted and produced by award-winning journalist Katie Couric, are bitterly divided into two camps: those who are encouraged to see our stories told, and those who yawn, bash, nitpick and naysay.

That doesn’t mean I don’t think you can’t enjoy it and not be critical, nor that you can hate it and still admire its production value. What I’m going on about here is our tendency as a community to split into camps of adoration versus condemnation. Witness what happened with “I Am Cait:” some people loved it, and a lot of people outright hated it. HATED IT.

This program is titled, “Gender Revolution,” and I don’t think you will find a more detailed exploration of intersex, gender non-conforming/non-binary and, yes, trans Americans than in the 88 minute documentary produced by National Geographic in conjunction with Couric’s team and World of Wonder productions. You might say I am biased because I got to see this before most of you did.

The award-winning Mombian blogger, Dana Rudolph, and I were invited last month, along with activists from several LGBTQ and civil rights organizations, to ask questions of Couric and the magazine’s editor-in-chief, Susan Goldberg about this effort, which coincides with the magazine’s launch of an entire issue devoted to gender. For the first time, National Geographic put an openly transgender person on its cover: 9-year-old Avery Jackson, looking fierce with her trademark pink ‘do.

And although Jackson and her family are not interviewed by Couric, which she not only hosted but executive produced, both the report and the TV special introduce readers and viewers to a variety of folks from kids to seniors, and from the world famous to everyday kids on a college campus.

Couric explores the science, the social perspective, and the political troubles stirred up in the fight for trans rights and intersex identity. And unlike other projects I’ve seen, she also delves into labels related to gender, including pronouns. Among my most favorite scenes are her interactions, as a mom, with other cisgender moms and dads, raising their voices as their trans and intersex kids’ strongest allies.

I met several of the people featured in the special, including steadfast Virginia trans student Gavin Grimm, sultry and savvy L.A. entrepreneur Michaela Mendelsohn, hilarious and wicked smart intersex advocate Georgiann Davis and legendary transgender pioneer Renee Richards, to name but a few, at a screening of the documentary last week in New York City.

In attendance was noted attorney and executive director of the Transgender Legal Defense and Education Fund, Jillian Weiss, as well as supermodel Andreja Pejic among a who’s who of trans folks, NYC celebs, including Couric herself.

I invited along noted activist, journalist and frequent TV expert guest Hannah Simpson, who brought a different perspective to the film than I did. The segment that I loved most is what bothered her most; but as my grandfather was fond of saying, that’s why we have horse races, because of each of us has our own opinion. It helped me to have the point of view of a millennial to offset what a 50-something baby boomer like me witnessed.

Anderson Cooper: Trump ‘watches me on CNN probably more than my mom’

Could Duke or NC State still host a NCAA tourney despite anti-trans law?