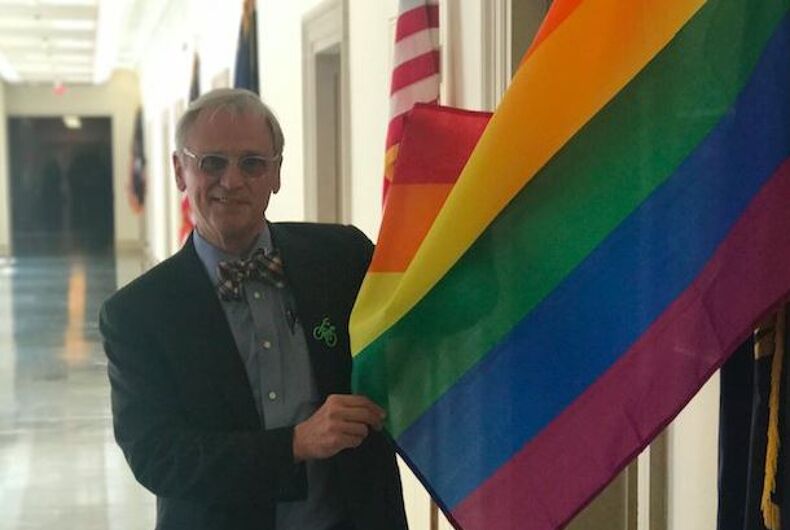 Congressman Earl Blumenauer with the pride flag outside of his office.Photo: Twitter/Dominic Holden

A man who has tried to take down same-sex marriage by repeatedly trying to marry his laptop is suing four Democrats in the House for displaying rainbow pride flags in support of the LGBTQ community in front of their offices.

Sevier is asking the federal District Court in the District of Columbia to determine that “‘homosexuality’ and other forms of self-asserted sex-based identity narratives are a ‘religion,’” and that the pride flags constitute a religious symbol for the “homosexual denomination.”

He is asking for $1 in damages, and that the flags be removed from the hallways. He also wants the politicians removed from office, claiming they are “representing an internalized danger to National Security interests.”

Instead of pride flags, Sevier suggested they could display flags supporting polygamists, zoophiles, heterosexuals, and machinists. He explained in his complaint that he considers himself a machinist, defining it as someone attracted to inanimate objects, including himself in that category.

Lowenthal’s flag was pulled down and stomped on earlier this year, and reportedly called it “disgusting” and “immoral.”

He has taken to Facebook to pledge to fight this latest attempt to smear the pride flag.

“I will fight this hateful attempt to silence equality and justice. We have come too far to allow the voices of bigotry and hate to win,” he wrote.

“I think we’ve come so far, and anybody who experiences Pride in San Diego, which was just this weekend, realizes that in San Diego, that this is the happiest day of the year,” Davis told The San Diego Union-Tribune.

“Our LGBT pride flag isn’t going anywhere. Of all the pictures and displays in my office, it draws the most consistent appreciation from constituents who visit us in DC. It is a symbol of the values we hold dear: acceptance and celebration of diversity, the fight for equality, and love. We will continue to display it proudly,” Beyer wrote on Facebook.

“Nothing is going to stop me from fighting for equality, justice, and peace,” affirmed Blumenauer.

Exclusive interview: Gavin Grimm is moving out & moving on