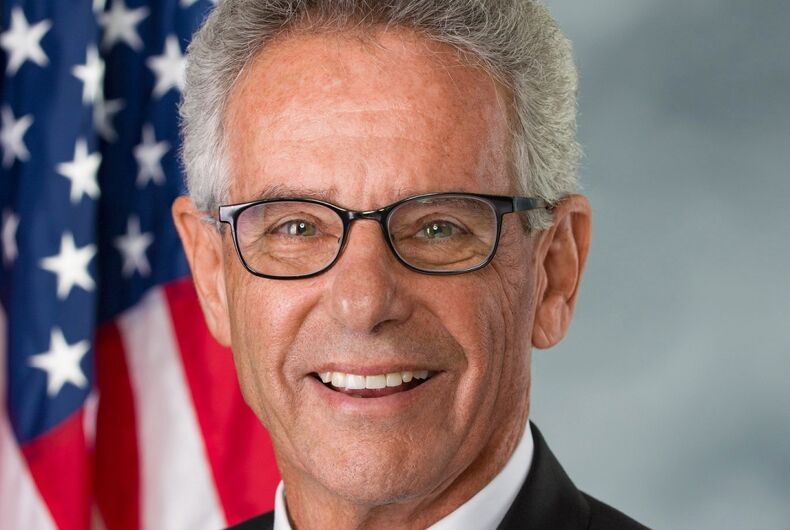 A man pulled down a rainbow pride flag from a U.S. Representative’s Capitol Hill office yesterday.

The man, who has not yet been identified, entered the office of Rep. Alan Lowenthal (D-CA). The man told staff members that the rainbow flag is “immoral” and “disgusting,” especially since the rainbow flag was being displayed near that American flag, Lowenthal said.

He then grabbed the flag, threw it on the ground, and repeatedly stepped on it.

Yesterday, a man threw #PrideFlag outside my DC office 2 floor-stomped on it-called it disgusting & immoral. We must pass the #EqualityAct!

“The fact that someone would grab a flag that they didn’t like and not just throw it on the ground, but stomp all over it … it’s certainly shocking,” he said.

Staff members tried to get the man to return to the office while they called Capitol police. The police spoke with the man but let him go because “he didn’t break any rules or any laws.”

The flag has already been put back up.

Lowenthal is the vice chair of the House LGBT Caucus and has displayed the rainbow flag since 2013 in his office. It was the first time the flag was displayed in the Capitol, and he usually gets positive comments about it.

“It just reinforces my belief that more work needs to be done,” Lowenthal told the LA Times.

Several other members of Congress from California expressed support for Lowenthal.

#LGBT pride flag is a symbol of equality & freedom. The attack on ?️‍? at @RepLowenthal’s office is an attack on our values as a nation. https://t.co/ErjUPgCVyr

The rise in violent attacks on minority groups has hit home in the @uscapitol, we cannot allow this to be the new normal #standwithLGBT https://t.co/EHSBc5agzl

Watch Lowenthal talk about the incident on the House floor in the video below.