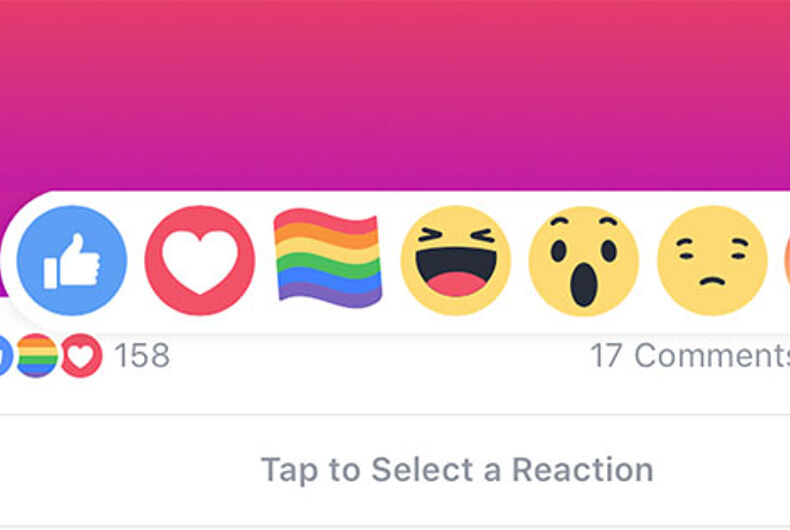 Facebook’s popular pride flag emoji is back! And more likely than not, you can’t have it.

PinkNews reports the social media giant has responded to complaints from users in cities where pride celebrations have not yet occurred, such as London, which is holding its festivities this weekend.

That’s after an uproar from users around the world at the end of June — the month during which most of the U.S. celebrates pride, but not all. As of July 1, Facebook removed the rainbow flag reaction from all users accounts worldwide. Apparently, the company didn’t understand that LGBTQ pride isn’t limited to just one month of the year.

A spokesperson for Facebook explained the decision to temporarily bring back the popular reaction emoji for selected users, in a statement to PinkNews:

You can also like the LGBTQ@Facebook page to access the reaction, however, because this is a new experience we’ve been testing, the rainbow reaction will not be available everywhere.

And not just in the U.S.

Facebook users in Egypt, Palestine, Bahrain, Lebanon, Singapore, Russia, among other countries, have never been able to access the pride emoji — because those countries either don’t condone or have outlawed anything that is considered “promotion of homosexuality.”

But if you’re in Brighton or Manchester, UK, Cologne or Berlin, Germany, or other cities where Facebook determines a local Pride celebration is occurring, you’re in luck.

Just go to Facebook’s official LGBTQ page, like it, and if you’re in one of the approved cities, the rainbow flag emoji should show up as an available reaction to posts, videos and photographs.

Facebook says if it doesn’t appear immediately, try refreshing the page or restarting your app. Or realize, this just ain’t coming back for you — probably not until next June.

There’s no word on how users can alert the social media service to their local pride celebrations that might not be on its radar.

You can sound-off in the Facebook Help Center, on LGBTQ@Facebook page, or in the comments section below.