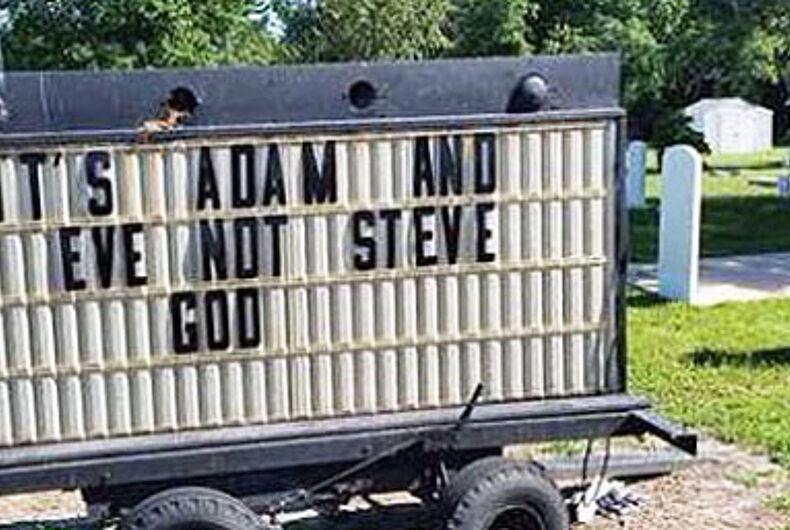 The sign that was outside Providence United Methodist Church in Georgetown, Delaware.Photo: Delaware Online

A Delaware church has removed an anti-LGBTQ message on the sign outside its doors, following complaints.

The News Journal of Wilmington reports the message, which read “It’s Adam and Eve not Steve” and was signed “God,” was up at Providence United Methodist Church in Georgetown, Delaware, for a week, before being removed Monday.

Pastor Regina Reeves and former pastor Walter Reeves said in a statement that the message was unauthorized and had been posted by an individual member of the church without the knowledge of its leadership… even though a photograph shows the sign is located right outside the church’s front doors.

The message in question was put up by an individual member of the church without pastoral or church leadership knowledge or approval.

We recognize that the message (which has been removed) was inappropriate and we want to assure you that this is not the message that is preached at this church nor does it reflect the respect for all persons that is the United Methodist way.

The sign’s removal followed a July 2 letter from a Georgetown resident pointing out that the United Methodist Church Book of Discipline prohibits discrimination against the LGBTQ community.

“It is just down right mean spirited to the GLBT community,” he said in the letter. “I’d also like to know what scripture and verse did God ever say: ‘It’s Adam and Eve Not’ quote the scripture and verse where this can be found, because I simply cannot find it in a number of the (Biblical) Translations that I am familiar with. It is, rather, a ‘sound bite.’ ”

He said if another house of worship had taken a stance against homosexuality, he would have let it go.

“But in this case it was a United Methodist Church,” he told a reporter. “I grew up in the Methodist tradition. They have taken a ‘love the sinner, hate the sin’ approach. … This sign was pretty much against their policy.”

Delaware Online reported that Sa, the Methodist district superintendent, could not be reached for comment.

© 2017, Associated Press, All Rights Reserved.
This material may not be published, broadcast, rewritten, or redistributed.
News
Adam and Steve, Delaware, Homophobia and Christianity