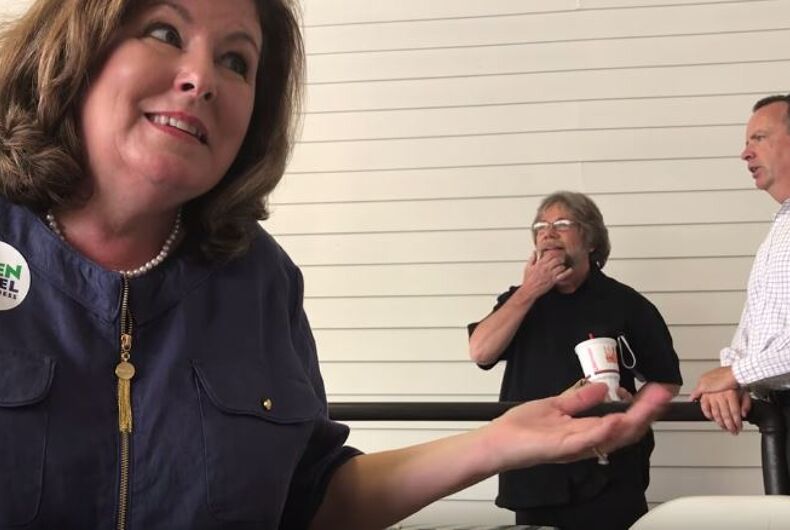 Karen Handel speaking with the parent of an LGBTQ child, shrugging off concerns over Mike Pence. Photo: YouTube Screenshot/Amanda Lee

Karen Handel, the Republican candidate for Congress in the hotly contested Georgia special election and former state secretary, has a complicated and not always friendly relationship to the LGBTQ community.

During the press conference announcing her campaign, she noted that she is “called to a different place” on LGBTQ issues due to her faith, but stressed her compassion, and added that she expected (read: hoped) other issues would take precedent during the campaign.

Well, the best laid plans of mice and politicians meeting with constituents go oft awry, as Handel learned at a recent campaign stop at a sandwich shop.

As the Georgia Voice reports, the candidate was twice questioned about her stance on gay adoption, as well as the rights of LGBTQ families, and both times pointed to her faith as the cause of her inability to go beyond hollow compassion devoid of action.

When asked about her feelings about gay couples adopting children…Handel said her “faith calls me to a very different place on these issues.”

“My faith at the same time calls me to be compassionate and what I have always believed is that what has to be paramount is what is the best interest of the child,” she said.

The second exchange took place between Handel and the mother of an LGBTQ child, who said she leans conservative but expressed concerns over her child’s rights under Republican leadership.

“My daughter is part of the LGBT community, and as a mom, and I’m like, ‘Well…what protections do I have for her having a family in the future, being able to adopt and have kids?'” she said. “So, there’s part of me that has the conservative nature, but then there’s the other part of me that’s like, I accept my daughter. So I’m split and torn. That’s what I’m concerned about before I vote on Tuesday.”

“I have to be honest,” Handel responded. “My faith calls me to a different place on the issue. My faith also calls me to be compassionate, and so I always try to do that. I’m not aware of anything in the law right now… that is going to be impactful from a discriminatory nature against your daughter.”

Alabama did the same last month, and lawmakers in Georgia sought to do likewise earlier this year.

When the mother expressed concern over Vice President Mike Pence’s anti-LGBTQ history, she shrugged it off, suggesting the issue of same-sex parenting was already decided by the Supreme Court, a message Republicans in many states, including the one she wishes to represent, have apparently not received.

The woman again tried to express her concern, and again instead of listening Handel gets defensive, repeating herself, this time with more energy, while gesticulating with her hands on the table.

“But I’m worried that he’s going to try to make changes – ” the mother said.

“So, so,” she said, while she lifted herself from her chair and stood up, ready to walk away.

“But I just want to make sure – I know you can’t guarantee any protections, but – ” the mother responded.

“I hear ya,” Handel responded, unconvincingly. “I can only tell you what I feel.”

Georgians vote tomorrow in the race to fill the seat vacated by HHS Secretary Tom Price, a contest that has major national implications, with Democrats hoping to score their first win in a special election since Donald Trump became president.