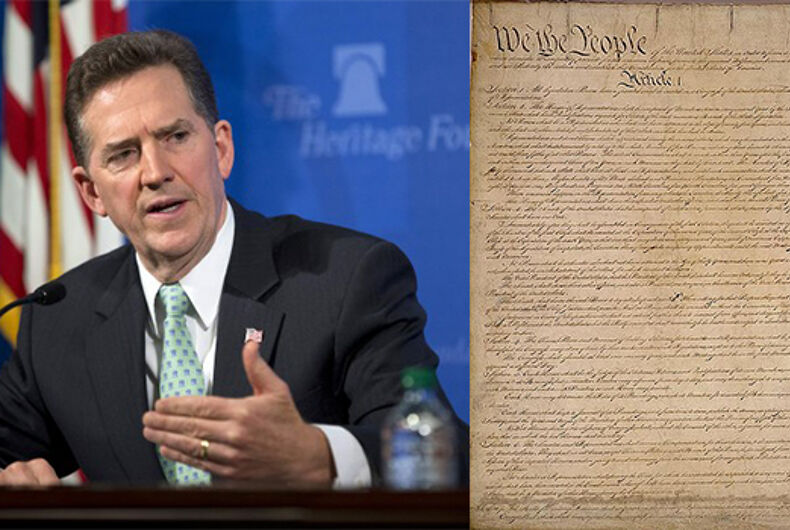 Former senator Jim DeMint (l) will lead a group of conservatives looking to amend the Constitution.Photo: Photo of Jim DeMint by Evan Vucci/AP

The Republicans can claim control of the White House and both branches of Congress, to say nothing of the Supreme Court, and yet they are not satisfied.

The regular political channels can be slow and full of obstacles even in good times; something President Donald Trump has come to learn. Change takes time, especially if your party is bogged down by scandal, and the GOP is growing increasingly impatient.

Conservatives are pushing to organize states to request a constitutional convention aimed at pushing their far-right agenda through at breakneck speed. The group behind the movement, the Convention of States, has landed a big name to serve as senior adviser to its efforts, former South Carolina senator Jim DeMint, USA Today reports.

DeMint is widely credited with being one of the main leading forces behind the Tea Party movement successfully sweeping conservative Republicans into the House of Representatives during the 2010 midterm elections. More recently, he served as head of the Heritage Foundation, a conservative religious think tank that let him go last month. An official announcement of his hiring is expected to come on Monday.

USA Today explains how this plan would work, if they can swing it:

Under Article V of the Constitution, there are two avenues to propose amendments: Two-thirds of each house of Congress can vote to do so or two-thirds of the states – 34 in total – can request the convention.

In either case, three-fourths of the states – or 38 states – must ratify any amendment proposed by convention delegates.

The USA has not held a constitutional convention since the first one in 1787, but proponents of a state-led conclave see growing momentum for their cause. Twelve states already have adopted the group’s call, and its leaders hope to add 10 to 15 next year. A separate effort demanding a convention to consider a balanced budget amendment already has the support of 27 states.

“The Tea Party needs a new mission,” DeMint told USA TODAY. “They realize that all the work they did in 2010 has not resulted in all the things they hoped for. Many of them are turning to Article V.”

DeMint and the others feel this is “a perfect time for us,” citing widespread disgust at the federal government as something they can use as leverage to get their way.

It is clear that this is how an increasing number of conservatives leaders see this as the way forward to finally turning the tide back against same-sex marriage, abortion rights, and nondiscrimination policies, and the whole slate of advancements made during Democratic administrations.

It is also their hope to curb the federal government’s regulatory powers, allowing states that so choose to treat workers and the environment with little or no concern.

The Convention of States’ website lays out its plans quite clearly, and it should send shivers up the spines of those hoping at least some of the progress made during the Obama administration, and in the years preceding, could be maintained.

It lists four key issues they see as “The Problem,” covering every aspect of lawmaking.

This includes spending on the social safety net, regulation of businesses, and the power of the federal government over the states.

One passage in particular from the group’s website gives an idea where LGBTQ rights would stand if their vision of the future is allowed to play out:

Congress has turned state legislatures into their regional agencies rather than respecting them as truly independent republican governments.

A radical social agenda and an invasion of the rights of the people accompany all of this. While significant efforts have been made to combat this social erosion, these trends defy some of the most important principles.

Further, it goes after the federal judiciary, the final backstop to prevent the rights of vulnerable communities from being attacked.

“The federal judiciary supports Congress and the White House in their ever-escalating attack upon the jurisdiction of the fifty states,” the group charges.

The goal is certainly ambitious, and if such a convention were to come to pass it would likely get out of hand quickly, despite claims that it could be run in such a way as to only deal with the issues outlined above. Yet, as state, it is gaining serious support.

Other key names involved in the issue include former Oklahoma senator Tom Coburn, Mark Meckler, co-founder of Tea Party Patriots and the non-profit Citizens for Self-Governance. Meckler is reportedly working with other conservative groups, like the powerful American Legislative Exchange Council (ALEC), to push the plan forward.

That means the efforts will have access to plenty of resources, in the way of both money and influence, to elevate this long shot into a realizable goal.

And before you scoff too hard, just remember this: Donald Trump is president.

More than ever it seems as if anything is possible, and if progressives hope to fight back, a serious effort against this move better materialize soon.

The Vatican priest building a bridge between the church & LGBTQ Catholics