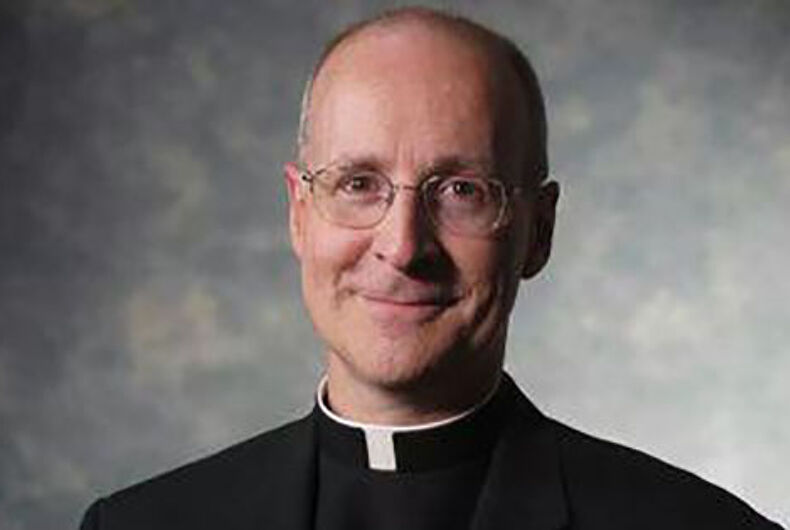 James Martin is a plain-spoken man who’s becoming well-known for saying things that might surprise both Roman Catholics and the clergy, about members of the LGBTQ community.

That may be because he’s also a priest. And not just any priest: he’s a Vatican appointee who consults with Rome on issues important to LGBTQ Catholics.

“They have as much right to be listened to as everybody else,” Father Martin told LGBTQ Nation in a phone interview. “In fact, I think they need to be listened to more, because of their experience of suffering.”

Sentiments like that — and a similar one in a Facebook post, in which he told homophobes they should recognize that some saints were gay — have attracted loud and angry detractors; one was a priest who questioned whether Martin was even a real priest.

Not only is he an ordained Jesuit priest, he’s already a bestselling author, and has written a new book, timed to coincide with the one year since the massacre at Pulse, which echoes the sentiments he shared after that horrific tragedy.

“Orlando really galvanized me,” Martin said, “Not just because of the tragedy itself but the reaction — or the lack of reaction by Church leaders. There were only a handful of bishops who even used the words gay or LGBT. And that really was revelatory to me. It revealed that even in their deaths, LGBT people are largely invisible in the Church, and to the Church.”

Last year, Martin posted a video to his Facebook page that’s been viewed more than 1.6 million times, a message that resonated with many LGBTQ Catholics as well as their straight allies.

Standing in solidarity with our LGBT brothers and sisters

Standing in solidarity with our LGBT brothers and sisters.Since I recorded this, I learned that Bishop Robert Lynch of St. Petersburg had expressed his condolences to the LGBT community and Bishop David Zubik of PIttsburgh had asked for prayers for gays and lesbians.Update 6/14: Bishop Robert McElroy of San Diego expressed sympathy for the LGBT communities and spoke out against homophobia, and Bishop Stowe of Lexington inveighed against homophobia.

Martin’s newest book, Building A Bridge, is now available, and it focuses on how both the Church and LGBT Catholics can work together to find common ground. And it’s no accident that it debuts shortly after the community remembered the massacre at Pulse.

“That was deliberate,” he said. “The desire was to pay tribute to those poor victims and pave the way forward, particularly for the Church.”

Martin told LGBTQ Nation he wanted to shine a light on the “unacknowledged” members of the Church who are lesbian, gay, bisexual, transgender and queer-identified. “They are still an immense part of the Catholic Church. The number of people who work in parishes, as lay associates, as music ministers, as directors of religious education who are gay is shocking to some people. If we could see them as a gifted community, as I say in the book, it would be a great grace.”

The priest acknowledged that criticism of the Church for its handling of the scandal involving priests sexually abusing boys and young men “is largely deserved.”

“It was a terrible sin. It is a terrible sin,” he said. But he said he’s heard just as many complaints about how the Church has treated its lesbian, gay, bisexual and trans parishioners.

“I’ve heard the most appalling stories from LGBT Catholics about how they’ve been treated in the Church,”Martin said. “I mean, the most depressing stories they’ve heard either from the pulpit or in person, usually priests, who say terrible and horrible things. One of the goals of this bridge is to tell the LGBT community that they are valued and are of value to the Church, which is hard after people are so beaten down.

And to those who question their place in the Church, Martin is succinct: “They’re baptized. So they’re Catholics. Period.”

So what does he say about all those biblical citations that far-right Christian opponents quote, in challenging the legitimacy of the LGBTQ community?