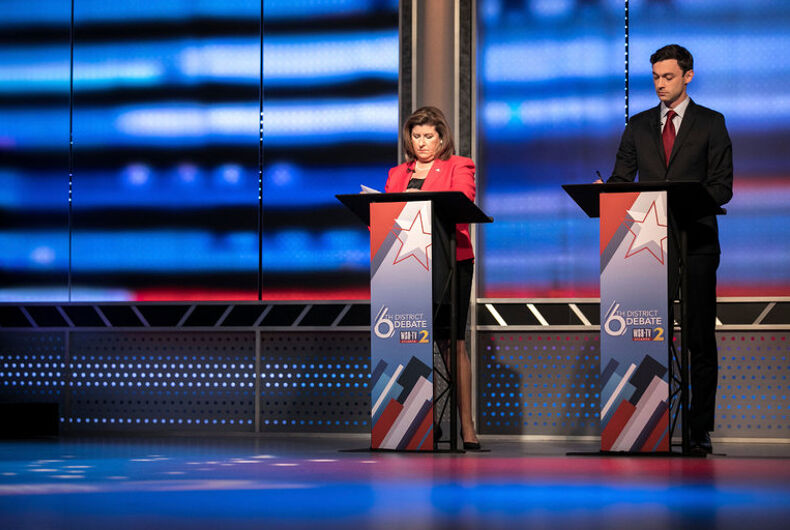 Republican Karen Handel and Democrat Jon Ossoff are facing off in one of the most watched Congressional races Photo: Branden Camp/Atlanta Journal-Constitution, Via Associated Press

Georgia’s special election in the Congressional 6th District has played out in front of a national audience, with a race viewed by many as a referendum on the Donald Trump presidency.

If Jon Ossoff can manage to beat out Republican Karen Handel to win the seat left vacant by Health and Human Services Secretary Tom Price it will be the first win for the Democrats in a race prompted by a lawmaker leaving their post due to landing a Trump Cabinet position.

It will help the Democrats gain much needed momentum ahead of the 2018 midterm elections, where they hope to win back the House.

Georgians go to the polls today to choose between Ossoff and Handel, and the hotly contested race has provided dramatic moments up to the very end. Here are five such developments worth noting while we bite our nails and await the outcome.

1. Most expensive House race in history

This is the most expensive House race in history, with millions pouring in from outside groups well aware of the national implications of this race. Just how much has been spent? Nearly $60 million, reports Roll Call. Much of that money has come from out of state.

NBC reports that over $26 million has come from super PACS, nonprofits, and party committees outside of Georgia.

An attack ad funded by a conservative group called the Principled PAC began airing on Sunday, attacking the “unhinged left” for supposedly endorsing violence against Republicans. The spot begins with gunfire played over footage of U.S. Rep. Steve Scalise being wheeled away on a stretcher after he was shot by a gunman that attacked him and others at a practice for a Congressional baseball game.

Both Ossoff and Handel condemned the ad. Ossoff said Handel should “call for it to come down,” and so far she has failed to do so, as The Washington Post reports:

For reasons that perplex many onlookers, a Handel spokeswoman did not call for the ad to be taken down, and merely called it “disturbing and disgusting.” As a moral and political matter, this seems to be a poor move that underestimates public disgust with vitriol and the politicization of violence. Handel’s refusal to issue a full-throated denunciation and demand for the ad to be taken down comes across as a wink-wink to the far right.

3. Video surfaces of Handel telling mother of LGBTQ daughter she’s against her rights

As we previously reported, Handel was recently captured on video telling a conservative voter with an LGBTQ daughter that she was against same-sex adoption and parenting. The woman had expressed concerns about her daughter’s rights, in particular under the Trump administration. Handel cited her faith as the reason she couldn’t support full rights for LGBTQ people, before getting defensive and walking away.

4. Trump tweets his support for Handel, misspells her name

President Trump tweeted his support for Handel, and went after Ossoff (yet again), although at first he had difficulty spelling the last name of his candidate of choice. He first tweeted out that Georgians should vote for Karen “Handle.”

He ended up getting it right in subsequent tries, sending out a flurry of tweets in her favor.

….because he doesn't even live there! He wants to raise taxes and kill healthcare. On Tuesday, #VoteKarenHandel.

Big day tomorrow in Georgia and South Carolina. ObamaCare is dead. Dems want to raise taxes big! They can only obstruct, no ideas. Vote "R"

Democrat Jon Ossoff, who wants to raise your taxes to the highest level and is weak on crime and security, doesn't even live in district.

KAREN HANDEL FOR CONGRESS. She will fight for lower taxes, great healthcare strong security-a hard worker who will never give up! VOTE TODAY

5. Polls tighten, it’s neck and neck to the finish

Polls show the race is neck and neck. RealClearPolitic‘s average of polls shows a statistical tie.

That means the race will come down to who can get their base out. The district has more registered Republican voters than Democrats, so if Ossoff is to pull off a win he will likely need a significant number of those voters over to come over to his side for this election.

It looks like whoever takes the day will do so narrowly.