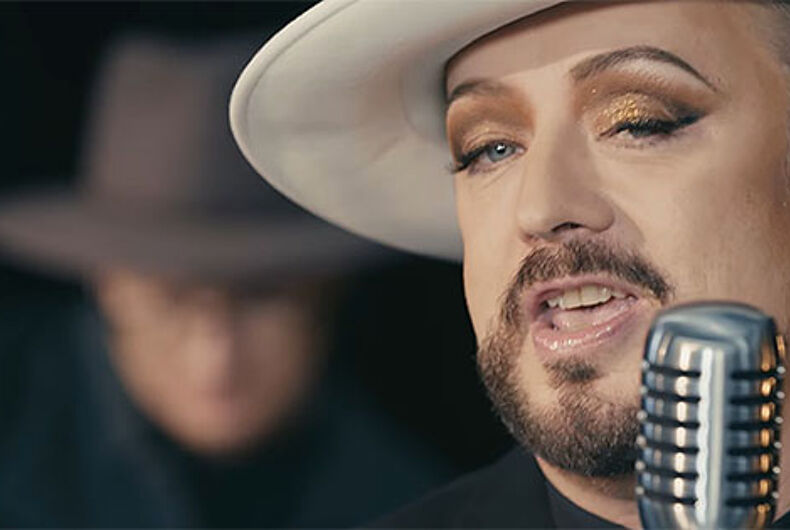 A new music video in support of a charitable cause down under features Boy George singing the classic “YMCA” anthem by the Village People like you’ve never heard it before.

YMCA Australia is hoping the song will help the organization raise money for its Why Not? campaign, to raise awareness of “issues young people are facing today,” including that nation’s battle for marriage equality.

It’s 2017 and some Australians still can’t marry the person they love…Why Not?

When there are no jobs for a career you’ve spend years studying for…Why Not?

No one is screaming that one in four young Australians has a mental health condition…Why Not?

The British singer who rose to fame 30 years ago with Culture Club was reportedly stunned to learn Australians were still fighting for their right to same-sex marriage.

As Gay Star News noted, it’s taken nearly 40 years for any branch of the YMCA anywhere in the world to capitalize on the immensely popular song.

‘It was a challenging conversation for us as leaders – the baby boomers and Gen X, said Melinda Crole, CEO of YMCA Australia. “We have to let go – it wasn’t about what we thought. It was about the young people.”

Crole told the Guardian she did not consult with Christian organizations before agreeing to the collaboration; YMCA is an acronym for Young Men’s Christian Organization.

”Research shows an overwhelming link between marriage equality and mental health – we are prepared to stand up for that,’ Crole said.

The YMCA says more than 10,000 people have been reached so far as part of its Why Not? campaign.

And if you prefer the original, we’ve got you, boo.