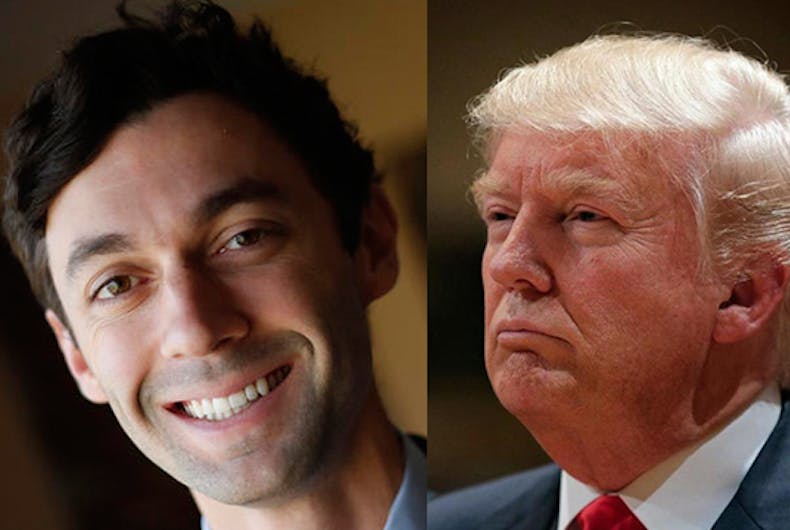 Jon Ossoff appears to have succeeded in his plan to "Make Trump furious."Photo: Associated Press

A special election in Georgia today has far-reaching, national implications for both the Republicans and the Democrats, who hope that a win by Jon Ossoff can prove they have a solid chance of winning back the House.

The House seat, representing the 6th Congressional District and left open when Tom Price was appointed by President Trump to become Health and Human Services Secretary, has been held by a Republican for two decades. Yet the district only narrowly went for Trump in the presidential election, and Ossoff, whose website reads, “Make Trump Furious,” has a legitimate chance of stealing it back.

One thing is for certain: He has already succeeded in upsetting Trump, who has unleashed a tweet storm against the candidate, aware of the dire implications if Ossoff can pull off the upset.

With eleven Republican candidates running in Georgia (on Tuesday) for Congress, a runoff will be a win. Vote "R" for lower taxes & safety!

Democrat Jon Ossoff would be a disaster in Congress. VERY weak on crime and illegal immigration, bad for jobs and wants higher taxes. Say NO

Republicans must get out today and VOTE in Georgia 6. Force runoff and easy win! Dem Ossoff will raise your taxes-very bad on crime & 2nd A.

Trump also recorded a robocall going after the 30-year-old candidate.

“Liberal Democrats from outside of Georgia are spending millions and millions of dollars trying to take your Republican congressional seat away from you. Don’t let them do it,” he said in the message.

Ossoff has been helped by an influx of millions from Democrats hoping this race can provide a much needed victory and finally produce some wind at their backs heading into the 2018 midterm elections. It has allowed him to blanket the airwaves with campaign ads.

“Only you can stop the super liberal Democrats and Nancy Pelosi’s group, and in particular Jon Ossoff. If you don’t vote tomorrow, Ossoff will raise your taxes, destroy your healthcare, and flood our country with illegal immigrants,” Trump added.

Ossoff is running against a slate of Republicans, as Trump notes, and would need to capture a full 50 percent of the vote in order to win outright and avoid a runoff.

Polls show him in the 40 to 45 percent range, ahead of his challengers by a sizable amount, 20 percentage points or more. But he will have to see a strong turnout to put him where he needs to be to avoid a challenging runoff election where Republicans are expected to come home and rally behind their eventual candidate.

Former Secretary of State Karen Handel and businessman Bob Gray are leading the Republican pack, hoping to get a chance to run against Ossoff. But they first have to make sure he doesn’t get to 50 percent, and he looks uncomfortably close. Close enough to make Trump sweat.

Are Ellen & Portia splitting up?