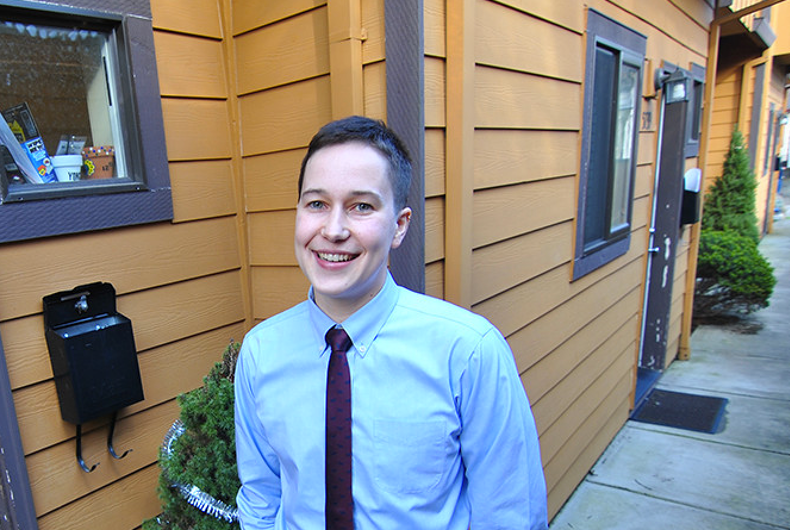 J Gibbons, a non-binary Oregonian, was among those who testified in favor of the new gender marker.Photo: Basic Rights Oregon

Oregon became the first state to offer a third gender option for state IDs yesterday when the Oregon Transportation Commission decided to add “X” for “not specified” to state IDs.

“This change in ID is a huge piece of validation for me,” J Gibbons, a 26-year-old non-binary and transgender Oregonian told The Guardian. “The state of Oregon sees me for who I am. I don’t even think ‘excitement’ can capture all of my emotions about this change.”

The change came after Oregon saw the first non-binary (neither male nor female) person receive legal recognition of their gender. Jamie Shupe successfully petitioned a judge to recognize them as non-binary last year. That court order set the wheels in motion for the DMV to reconsider its gender options. And last March, an Oregonian named Patch successfully obtained legal recognition as agender (no gender).

With a growing number of individuals seeking to formally change their identity documents to reflect their non-binary identities — whether non-binary, agender, or intersex — the state’s DMV had to find a way to reflect these legal gender identities on ID cards. Advocates worked with the agency to come up with a solution as it held public meetings  across the state to get feedback from non-binary Oregonians.

“It’s exciting to see Oregon’s Department of Motor Vehicles adopt this change. We know gender is a spectrum and some people don’t identify as male or female,” said Basic Rights Oregon Co-Executive Director Nancy Haque. “Our lives are so gendered, which is why it’s important that driver licenses and other forms of IDs recognize people who are non-binary. Removing barriers for people is critical to helping all of us live healthy, productive lives.”

Neola Young, a non-binary advocate and consultant who worked behind the scenes to help shape the proposed rule, told LGBTQ Nation that the change may be new, but people’s identities aren’t.

“This is a great move forward to make it possible for more of us to see ourselves reflected on our IDs,” Young said. “It is not a new thing that people exist who are not male or female, but our identification documents have not allowed for that.”

It’s not a perfect solution, some say, but a step in the right direction. The X indicates to the DMV that a person’s gender is not specified, but that may not be an accurate reflection of everyone who identifies outside the gender/sex binary. In many ways, the X serves as a way of saying “other.” And while that gives people an alternative to M or F, it’s not specific.

“As it stands, the addition is in no way representative of any group of people. It is a lack of representation. While some individuals may find that to be what they want, it’s no different than the erasure caused by the “other” checkbox that we’re all too familiar with,” Patch told LGBTQ Nation. “Representation for all, or representation for none — anything else is — without question — discrimination. Allow self-declaration of all identities, or do not capture the identity information.”

Patch said the one good thing about the decision, which Patch supported on the whole, is that it opens the door for people of diverse identities to request accurate options for themselves. The addition of a new gender option, and in a relative short time-frame, makes it more difficult for agencies to claim that technical limitations, or lack of precedent, prevent them from adding other gender markers.

As people celebrate the X, Patch wants them to keep it in perspective, “If any individuals identify with an X — own it. Simply keep in mind that the state of Oregon is continuing to refuse your and any non-cis people’s specified gender (or lack thereof), even if specified by a court order.”

The DMV said the rule change was easy to make.

“This is a pretty small change,”agency spokesperson, David House told The Guardian. “There was very little opposition.”

Still, some people are concerned Oregon’s new ID option will causing problems with other systems and states not set up to recognize more than two genders.

“To this concern, my response is intentionally simple: it is not your job to do other people’s jobs,” Patch wrote in testimony delivered in May. “That is to say, you currently sit in a position of privilege where you are afforded the ability to afford other people freedoms—and it behooves you to not allow others to stop you from doing so.”

Oregon’s state ID already fails to meet the requirements of the Real ID Act, though there is legislation currently being considered to address that. And while Oregon will offer options different from those in other U.S. states, it joins countries and cultures that have long recognized non-binary identities, including Canada, India, Bangladesh, Australia, New Zealand and Nepal. And X is the internationally recognized indicator of non-binary gender for United Nation states.

Still, that doesn’t alleviate the practical concerns that arise, or fears of the X putting a target on the backs of non-binary people.

“I’m excited about the possibility of having more accurate documents for myself as a non-binary trans person,” Young told LGBTQ Nation, adding, “I’m still unsure if I will take advantage of it as I’m still not certain how an X marker will be received or processed when I travel or go to see my family in my home state of Mississippi. IDs are a big part of the scrutiny trans people face every day.”

Is the rest of the country ready for what Oregon has set in motion?

At least one state is hoping to be ready soon. In California, which has likewise been on the forefront of recognizing non-binary identities, the Senate recently passed the Gender Recognition Act, which would enable Californians to obtain state-issued identity documents that reflect their non-binary identity. If passed, this bill would go beyond state IDs to include birth certificates and any other documents issued by the state. It would officially make California the first state to not require residents to identify as “male” or “female.” It would also include some measure recently passed in Oregon, including streamlining the process for changing one’s legal name or gender.

“Our society is becoming more enlightened every day about gender identity,” Co-sponsor Sen. Toni Atkins (D-San Diego) told LGBT Weekly after the bill was introduced in January. “It’s time for our state to make it easier for transgender Californians and those who don’t conform to traditional notions of gender to have state-issued identification documents that reflect who they truly are. This bill will help them avoid the discrimination and harassment that too many of these residents face in their daily lives.”

Young hopes that Oregon’s actions will inspire other states to move the needle on visibility and inclusion for people who are non-binary, agender, or intersex.

“We have a lot to do to look at how our documents are used, when they’re used and when they’re unnecessary. We have so many document processes that sit within state or federal control and most of them are so different from each other,” Young explained. “Advocacy like what we have experienced in Oregon is needed at all levels.”