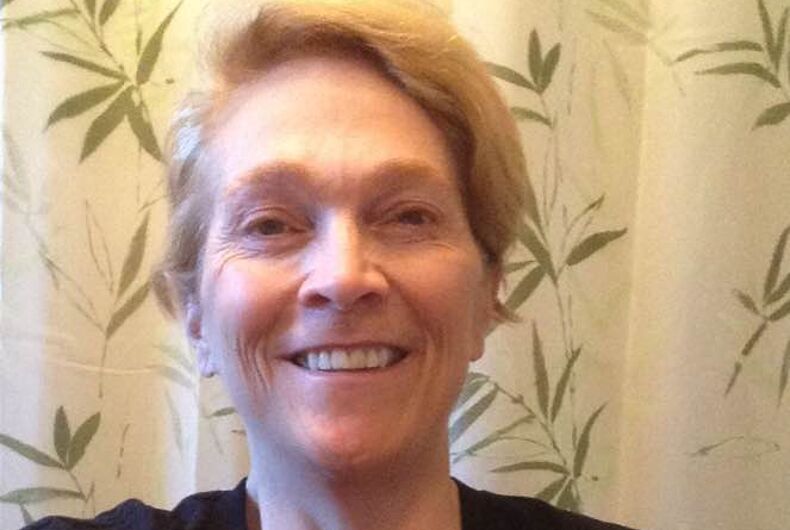 Sara Kelly Keenan received a court order declaring her gender “non-binary” on Monday. Keenan is the second person in the nation to receive such a designation, and says she was inspired by Jamie Shupe’s groundbreaking victory in Oregon earlier this year.

“The DMV will never have seen this before. In my imagination I can already see the confusion on the other side of the service counter,” Keenan posted on Facebook yesterday. “This is how change happens. Slowly….until it lurches forward impressively. I wonder how into ‘driving change’ the DMV will be Monday! I hope for mutual cooperation to make this civil right commonplace for all non-binary Californians!”

Keenan told NBC Out earlier this week that she was diagnosed with Swyer Syndrome, an intersex condition, as a teenager but only confirmed her intersex status as an adult:

When Keenan was a teenager and showed no signs of starting puberty, she was diagnosed and underwent a surgery to remove gonadal tissue—a process that she said was not fully revealed to her by her parents or doctors. Like most parents of babies born intersex, Keenan’s mother and father chose her gender without consulting her in the process. After living her entire life as a woman, Keenan visited an endocrinologist seven years ago who confirmed her suspicions that she was born intersex.

Keenan recognizes that she probably won’t walk out of the DMV on Monday with a new license. Rather, she’s starting a process.

“It won’t happen for some time,” she explained in a comment. “I must force them to create a mechanism (software) to make it possible. A software engineer and would have to create a “field” on a DMV computer screen that doesn’t YET exist.”

But, she added that she recently got a call from the DMV, which she says is aware of her court order.

“They are beginning the process of creating an advisory committee to create the infrastructure that will allow for a gender designation of Non-Binary. It will take many months, but I believe it will happen,” Kennan wrote. “They are also coordinating with the Oregon DMV, which Jamie Shupe is making great headway with.”

NBC Out reports that the Oregon DMV, also on Monday, sent Shupe an email saying that it is beginning work on creating rules for non-binary identifiers on drivers licenses. Shupe celebrated their initial legal victory in June.

“Last week DMV received the okay to move forth with forming an advisory committee and drafting administrative rules regarding the capturing of sex on the driver license,” the email fromOregon DMV’s Driver License Policy Program Coordinator Renee Davis said. “The rules will allow DMV to capture and print an identifier for sex other than M for male and F for female on the driver license, permit, and ID card.”

Shupe celebrated not only their good news, but Keenan’s as well.

“This is excellent news,” Shupe wrote in reply to Keenan’s Facebook post. “The historical significance is off the charts mindblowing.”

Keenan added that she is also in the process of finding a way to have her New York birth certificate amended to reflect her non-binary gender.