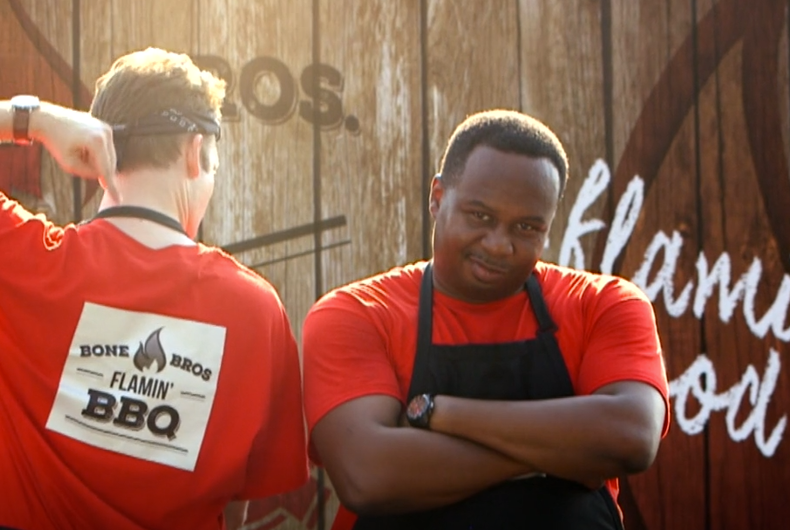 In a sketch for "The Daily Show" Roy Wood Jr. and Jordan Klepper highlight the absurdity of North Carolina's HB2.Photo: Comedy Central

To illustrate what North Carolina’s anti-LGBTQ HB2 law looks like in action, “The Daily Show” decided to test it out by setting up a fake food truck that turns away people they suspect are gay. Which turns out to be just about everyone.

As host Trevor Noah notes, HB2 is also know as the “bathroom bill,” we he adds is “not to be confused with Bathroom Bill, the man who invented the glory hole.”

The first customer they reject is clearly taken aback.

“I mean, whatever you want to tell yourself at night man,” Wood replies.

Which is true. North Carolina’s HB2 makes it perfectly legally to discriminate against people based on the perception that they are lesbian, gay, bisexual, or transgender.

Next, a group of three men approaches to order lunch. One of the actors asks if they’re “together” and the men reply affirmatively, referring to the fact that they work in the same office.

As the skit continues, they up the ridiculousness, telling the next rejected customers, “Your gay tastebuds aren’t even calibrated to enjoy straight mac and cheese. They’re more cultivated to enjoy things like cilantro and penis.”

In the final encounter, they meet a pastor who stands up to their discrimination on principle, reminding viewers that the majority of North Carolinians think the law is bad for the state.

“Even if he were gay, I mean, still you should serve him,” the pastor says.

Don’t worry, at the end of the day, they let everyone in on the joke and gave them free BBQ to boot.

Watch the full sketch below.

Californian second in U.S. to have non-binary gender approved by court