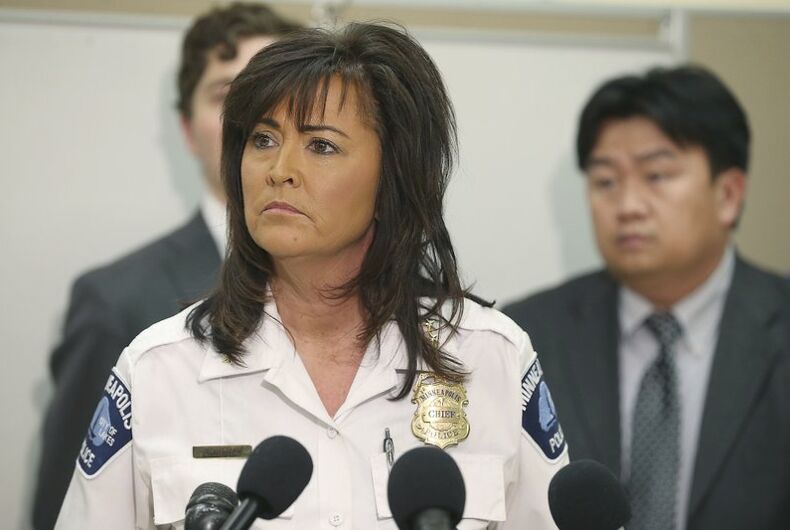 Minneapolis’ first openly gay police chief responded sharply Thursday to a decision by organizers of the Twin Cities Pride Parade to ask her department to minimize its participation in Sunday’s annual event due to tensions over the police shooting of Philando Castile.

They said in a statement that they’re trying to respect the pain that many people are feeling following last week’s acquittal of St. Anthony police officer Jeronimo Yanez, who killed the black school cafeteria worker during a traffic stop in Falcon Heights last July.

But Minneapolis Police Chief Janee Harteau, who is lesbian, sent a letter to Twin Cities Pride executive director Dot Belstler calling the decision “divisive” and saying it “really hurt so many in our community,” including LGBT officers and their families.

Harteau said she was “beyond disappointed” that she wasn’t consulted before the group went public with its request, and she pointed out that she was the parade’s grand marshal three years ago.

“Despite your decision, I assure you that as we have in the past, our team of officers assigned to work the parade will do all they can to ensure it is a safe and successful event,” the chief wrote.

Parade organizers said Thursday that they were talking with police and other affected groups about their request to not have uniformed officers at the event.

“Our goal is to create a cohesive, unifying solution that is inclusive of each perspective on this topic,” Twin Cities Pride said in a statement.

The organizers said they’re required to have a police car lead the parade to make sure the route is clear, so this year it will be a lone unmarked squad car and there will be limited police participation in the parade itself. The parade, which draws about 350,000 people, has started in previous years with several marked squad cars with lights and sirens, as well as officers marching.

“For an organization that prides itself on being accepting and inclusive, the hypocrisy amazes me,” he said.

“I understand that people are angry and we can respect their feelings, but … if we can’t work together, it gets more challenging to become better as a community, as a police department.”

Darcie Baumann, the board chairwoman of Twin Cities Pride, said the group didn’t intend to make anyone feel excluded.

“Unfortunately, we have hurt and offended the LGBTQ police officers, and that was not at all our intent,” Baumann said. “But in the wake of the verdict, we want to be sensitive to the population that is grieving … and seeing those uniforms brings angst and tension and the feeling of unrest.”