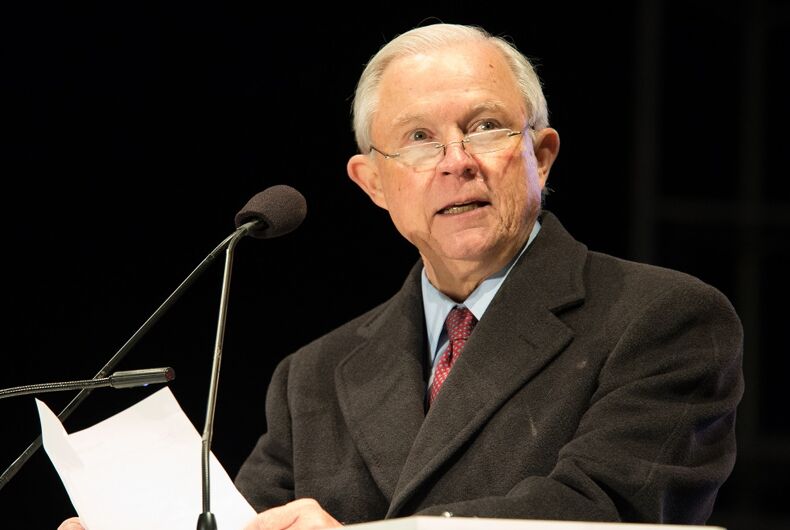 Yesterday, DOJ Pride, a group of LGBTQ people and supporters in the Department of Justice, announced that they would be holding an event to honor DOJ employees and a student who has worked to fight for LGBT equality.

The move was read as a rebuke against Attorney General Jeff Sessions’s actions this year, which included rescinding Obama-era protections for transgender students. The student that DOJ Pride is honoring – Gavin Grimm – would have had his case to use the appropriate bathroom at his public school heard by the Supreme Court if Sessions had not rescinded those protections.

Yesterday, at a staff meeting, a DOJ intern asked Sessions about how the White House and the DOJ haven’t acknowledged Pride Month. He responded by citing the DOJ Pride event positively.

We are going to have a pride group, in this very room, I think next week, I believe it is, and so that’s perfectly appropriate, and we will protect and defend and celebrate that — and protect the rights of all transgender persons.

He went on to say that he has asked the civil rights division of the DOJ to look into the murder of a transgender person.

For example, I received a letter expressing concern about the sudden transgender persons who had been killed, and concern about it, and so I, first thing, directed the civil rights division to look into those … to see if there was any uniform attack, or if there was just a uniform hostility that would result in these murders, and to review each one of those cases that were sent to me. And they have done that, and I think it’s possible that they’re going to re-open one and solve it, as a result of that.

He didn’t name the victim and the DOJ did not say who the victim was when later asked.

In addition to rolling back protections for transgender students, the Department of Justice has also issued verbal instructions to the civil rights division to end the use of consent decrees. Consent decrees can be part of a settlement when an organization like a school or a police department gets sued by the DOJ for discrimination. A consent decree includes steps that the defendant will take to combat discrimination and are presented to the judge, and both parties can return to the judge if the consent decree is not being followed.

Consent decrees have been used to help desegregate schools and are a useful tool in ensuring that discrimination actually stops after a court case.

While it would be best if Sessions wasn’t working to make the Department of Justice less able to fight discrimination, his response yesterday was better than his response to another LGBT conference in the 90’s when he was attorney general of Alabama. Then, he tried to get a court to shut down a conference for college students under a state law that banned positive discussions of homosexuality, saying that it would cause “irreparable harm” to the state.

Had the honor of asking Attorney General Jeff Sessions a question that is very important to me today! pic.twitter.com/NG8YjMX9us

Why is the ACLU defending a school employee who called for death to ‘all fags’?