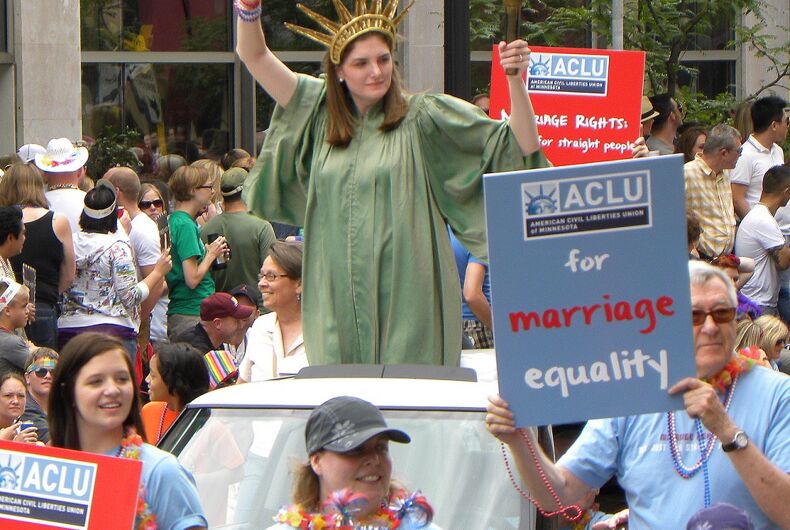 The ACLU at Twin Cities Pride in 2011Photo: Wikimedia Commons

So why is the ACLU, which has been a stalwart defender of LGBTQ rights, defending a guy who called for death to all “fag’s”?

I hope this event turns out like the Boston Marathon a few year’s back.All fag’s should be killed or at least relocated.

Columbus Police investigated the post as a possible bomb threat and contacted the Department of Homeland Security.

In the meantime, a petition on Change.org for Dodds to be fired has gotten over 56,000 signatures. Last Friday, a spokesperson for the school district said that it is “working toward Mr. Dodds’ termination.”

Dodds’ employment was not on the agenda of last Tuesday’s meeting of the Columbus Board of Education. The board did have a private meeting “to consider the appointment, employment, dismissal, discipline, promotion, demotion or compensation of a public employee or official,” but the board returned to the public meeting without comment.

The ACLU has released a statement defending Dodds, even though the organization will not confirm whether it has been in contact with him about the case.

“It hurts to see hate like this, especially during PRIDE month – a month of joy and celebration for my community. But a government employer cannot censor its employees’ protected statements, no matter the content,” Elizabeth Bonham, an attorney with the ACLU of Ohio, wrote.

Bonham went on. “Suppressing speech is not the way to fight discrimination. We will continue our work to ensure that the LGBTQ community is free from prejudice. We will also be vigilant against threats to free speech. Both goals are achievable and in fact they are connected.”

She also argues that Dodds’s comment didn’t name anyone in particular or say that he was going to carry out an attack himself. The police already investigated his comment, so I’m guessing that they didn’t consider it a credible threat either.

Tom Neff, who started the Change.org petition, doesn’t agree with the ACLU’s position. “We are far less concerned with the slur than the insinuated threat the first part of his post covered. That he hopes it turns out like the BOSTON MARATHON!” Neff posted on Change.org.

“Are you kidding me? Thiaans [Ed.: “These”?] words may not directly threaten one person but they very well could lead to inciting violence in other far more extreme anti LGBTQ people. I refuse to let this man have no consequence to his action, spread this petition far and wide.”

I’m going to go out on a limb and say that a vague, two-sentence comment on Facebook that was deleted minutes after being posted to a page full of LGBT-friendly people has a very low chance of inspiring anyone to violence.

While there are times when it’s appropriate, people should be more cautious in calling for others to lose their jobs because of what they do in their free time. Dodds isn’t in regular contact with students so there isn’t an argument about how this makes him bad at his job, he didn’t use school property to post the message, and there isn’t any evidence that he’s planning on actually killing his co-workers who are gay.

Dodds works for the government so his statements made outside of work are protected by the First Amendment. But wouldn’t it be great if everyone – even those who work for private employers – had that kind of protection? Just a month ago a teacher was fired from a private school, possibly because he had a profile on a gay dating site. His profile didn’t mention his name or where he worked.

On balance, not allowing private employers to police their employees’ speech would probably be better for everyone.

The ACLU’s first and main issue is free speech, and they’re pretty strict about that. It’s not surprising that they would support Dodds here, even though they have a great record on LGBT issues.