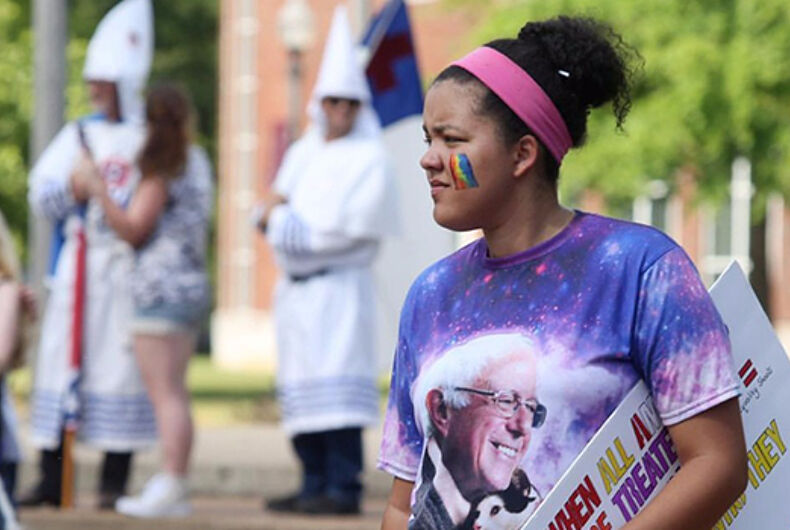 Members of the Ku Klux Klan protested an Equality March in Florence on Sunday, believed to be the first ever organized Pride parade in Northwest Alabama.

Benjamin Newbern, executive director of Equality Shoals, estimates about a dozen or so white supremacists in full Klan regalia crashed the event, attended by well over a hundred community members demonstrating for LGBTQ rights.

“Hate has always been here but it reared its ugly head yesterday to show that it’s still around.”

“Today marks the 1-year anniversary of the Pulse nightclub massacre and the 50th anniversary of Loving V. Virginia, which legalized interracial marriage,” Newbern said in a statement on Sunday. He added that the KKK’s presence is a reminder that, “In 2017…hate still exists.”

Some of the KKK members on hand posted a video to Facebook to explain why they were there that day, claiming they were “standing up” for their “Christian beliefs.”

There was a sizable police presence at the event, and there were no reported incidents of violence.

The Florence Police Department took to Facebook to promote their presence at the march. Their posts included some questionable statements, including ending one with a hashtag identifying police as the defenders of the Confederate cross.

*Clears throat* Related: The FBI has been investigating the KKK’s infiltration of law enforcement for years.

Another read, “Two sides, opposing views,” in what struck many as an attempt to make an unfair comparison.

Florence Police did not respond to a request for comment from AL.com.

Will Cross, a member of the Equality Shoals board of directors, was one community member raising alarms over the postings.

“That’s very odd because that group to me is based on hatred and is like a terrorist group to me,” Cross said. “I don’t think there should be an equivalence there because we paid and got permits and hired police officers, and they just kind of showed up trying to scare people.”

Still, he wished to stress the overall success of the event.

“Honestly, I’m really impressed that as many people showed up as did, especially in our small town where it’s typically really conservative,” he said. “I was also really impressed that there were tons of families and small children there with signs saying things like ‘I support my gay child.'”