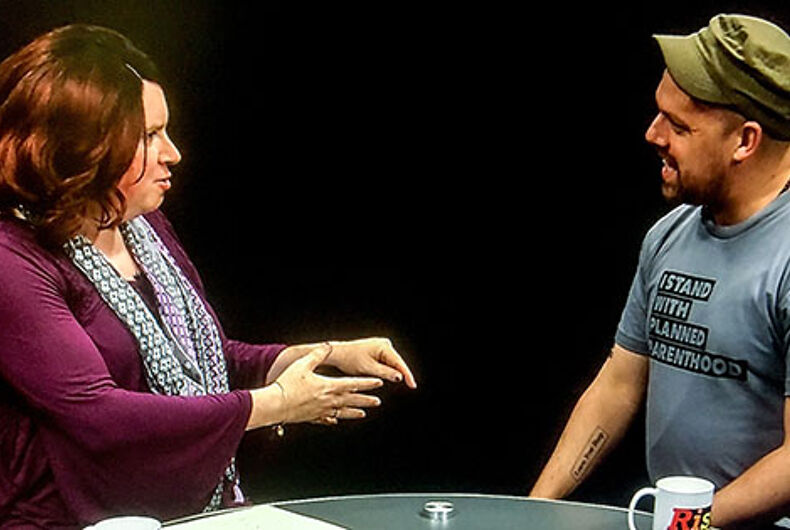 As Patrick Comerford tells it, his introduction to Planned Parenthood was as a rebellious, mostly closeted gay teen who didn’t want his parents to know about his sex life. He turned to one of the group’s Connecticut clinics for help preparing himself for safe sex, and it wasn’t long before he became an intern and then a part of the staff.

Comerford, now the organizing and training specialist of Planned Parenthood of Southern New England, is my guest this month on a talk show I produce and host on YouTube called RiseUP With Dawn Ennis. My aim is to introduce viewers to people who can help all of us do something more than just sit on the couch and yell at the TV or the internet; to get involved in our communities and active in our politics; to RiseUP.

“Our mission is more than just protecting the fundamental rights of people to control their sexuality,” Comerford told me, “but it’s also about making sure people have access to that right.”

And to those who believe Planned Parenthood as opponents of “the right to life,” we can see from at least one tweet, it’s clear: Comerford adores babies.

So why would a queer man devote his life to what is generally known as a women’s healthcare provider, and to many who belong to the Christian right, nothing more than an abortion clinic?

“I think everybody needs to be speaking out about what’s going on, and making sure everybody has access,” said Comerford, in drawing attention to Republican lawmakers’ ongoing efforts to defund the non-profit organization and limit and ultimately end a woman’s legal right to choose abortion. “So that is huge to me. Planned Parenthood sees LGBTQ patients, and as a man it is important to me.” In fact, the group is believed to be the nation’s largest provider of healthcare to transgender Americans.

“Now my relationships will likely never end in a pregnancy that needs to be tended to; that’s not something that I’m facing,” he said, and even told his superiors when he started his internship that abortion didn’t bother him and was “not my thing.”

But over time I have realized my community needs [Planned Parenthood]. And I have talked to countless women who need it, who need access, whether it’s us or a community health provider, to comprehensive reproductive health care. And everyone, no matter their gender, has an obligation to stand up and make sure everyone has access to healthcare. Healthcare is a basic right and we need to look at it as such.

And Comerford is sensitive to the fact that calling it “women’s healthcare” erases the transgender men who seek their services.

“We have to talk about men who have abortions,” he said. “We need to make sure we’re bringing everyone into the conversation to talk about it as a human right.”

As far as the argument against the organization from the right that it does nothing more than provide abortions, Comerford said 97 percent of its work is focused on providing comprehensive healthcare, and only 3 percent of its efforts are in the practice of providing safe and legal abortion services and counseling.

Also in this episode, the award-winning blogger behind Transgriot, Monica Roberts, is my special correspondent on this month’s episode of RiseUP.

Roberts discusses her longtime advocacy on behalf of the transgender community in Texas as well as her thoughts on the ongoing epidemic of violence and murder of trans women, especially trans women of color.

My talk show is a production of WHC-TV, West Hartford Community Television. You can find more information about the program on our Facebook page and on my blog, Life After Dawn.