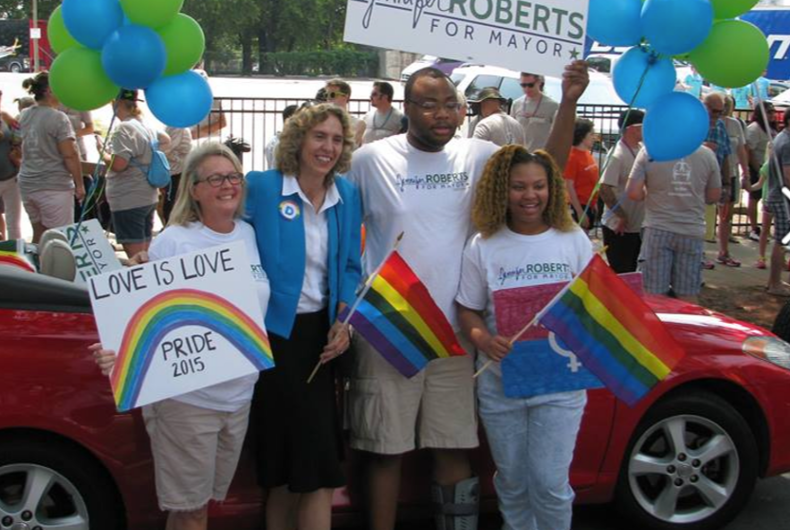 Charlotte Mayor Jennifer Roberts is among the N.C. mayors asking for cities across the country to drop their bans on travel to the state, noting that they don't have control over its anti-LGBTQ law.Photo: Jennifer Roberts via Facebook

The mayors of some of North Carolina’s biggest cities are asking their colleagues across the country to end travel boycotts over a law critics say continues discrimination against LGBT people.

The mayors of 16 cities including Raleigh, Cary, Chapel Hill, Concord and Charlotte wrote a letter released Friday asking for the return of conferences and conventions to North Carolina’s cities. Those events are limited by travel bans states like California and cities like New York, Los Angeles and Washington, D.C., are vowing to keep in place.

The letter tells mayors in nine big U.S. cities that North Carolina municipalities are hurting from the travel bans but lack power to increase LGBTQ protections.

The Trump administration dropped a lawsuit Friday accusing North Carolina of discriminating against LGBTQ residents in response to the state’s decision to undo its “bathroom bill.”

The Justice Department’s withdrawal represents the first significant movement in a tangle of legal action over the state’s nondiscrimination laws since a deal last month to get rid of House Bill 2.

North Carolina’s compromise got rid of the most well-known provision of House Bill 2 that required transgender people to use restrooms corresponding to the sex on their birth certificates in many public buildings. The new law makes clear that state legislators, not local governments, are in charge of any future bathroom policies.

Tara Borelli, a lawyer for Lambda Legal, said her group will amend its lawsuit to challenge the new law, arguing that it continues harmful aspects of its predecessor. She said losing the Justice Department as an ally won’t weaken the case.

Separate from the Justice Department’s decision, an appeals court earlier this week asked Borelli and her colleagues for more information about how the new law will affect their case. The 4th Circuit Court of Appeals ordered both sides to file new arguments by late April.

The new law received a vote of confidence from the NCAA and ACC, which had moved events out of the state. The NBA is also considering bringing back its All-Star Game, which it pulled from Charlotte.

Some business leaders applauded the compromise, while others said it didn’t go far enough.

Democratic Gov. Roy Cooper, who helped broker the deal, has said he wants to extend LGBT protections further but that House Bill 142 was the best compromise that the Republican-controlled legislature would approve.

The Justice Department’s withdrawal from the legal battle wasn’t unexpected. Weeks before the deal to undo House Bill 2, the federal government told a judge it was backing away from a request for an injunction. The lawsuit was started last year under then-President Barack Obama.

The Trump administration also reversed guidelines that transgender students nationwide should be able to use school bathrooms corresponding to their gender identity.

The policy change, along with a separate lawsuit by a transgender student in Virginia, are expected to influence the litigation in North Carolina. The Virginia case is pending before the 4th Circuit.

Caitlyn Jenner blames Ellen for her unpopularity in the LGBTQ community

Yep, Ellen came out 20 years ago — and changed the world