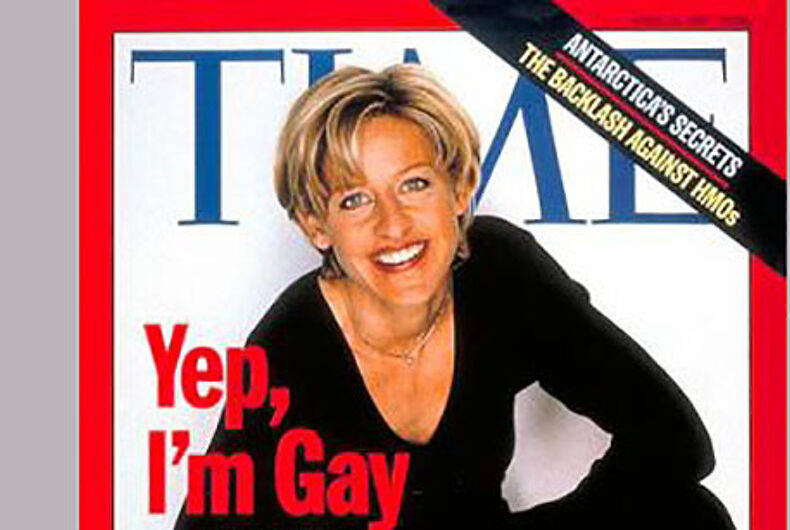 Twenty years ago this month, Howard Stern’s raunchy radio show reached nearly 60 cities across America, Steve Irwin hunted crocodiles on television, and more than 5 million of us got goosebumps every time we turned on our newfangled computers and heard these three words: “You’ve Got Mail!”

Then, on April 14, 1997, Ellen DeGeneres came out on the cover of Time magazine, and the editors summed up this milestone moment with these three words:

DeGeneres revealed her sexual orientation just two weeks before her character on her sitcom, Ellen, famously came out in what was called “The Puppy Episode,” with costars Laura Dern as her love interest and Oprah Winfrey as her therapist.

I remember watching, back in the dark ages before DVRs, and even though I knew what was about to happen I was nervous with anticipation. Ellen was going where no man or woman had gone before.

As Time reported in its 1997 article, the sexual orientation of both DeGeneres and her character, Ellen Morgan, had been the subject of speculation for years. The comedian had spent a lot of time and energy arguing with curious journalists that they should respect the distinction between her public and private life, but once word got out that Ellen Morgan was coming out of the closet on the show, months before the episode aired, DeGeneres consented to reveal herself:

Time: So, for the record, are you yourself gay?

DeGeneres: Yes. You’re the first person that I’ve—I mean I knew that I was going to—that was one of the things when I decided to have my character on the show come out, I knew I was going to have to come out too. But I didn’t want to talk about it until the show was done. And you know, I watched my friend Melissa [Etheridge] come out, and she became “the lesbian rock star.” I never wanted to be “the lesbian actress.” I never wanted to be the spokesperson for the gay community. Ever. I did it for my own truth.

DeGeneres: I don’t think I could have done this a long time ago, and I don’t think people would have accepted it as readily as they do now. Now I feel comfortable with myself, and I don’t have to be fearful about something damaging my career if it gets out, because now I’m in control of it—sort of. No one can hurt me now.

Time: What was harder, this or coming out to your family?

DeGeneres: This. I mean, I don’t understand a fear of coming out to your friends and family. I’ve been really lucky. I have a really great family. I have parents who understand. My mother understands, now even more so. My father is supportive. My dad said the most hilarious thing when I told him what I was going to do on the show. He said, “You’re not going to go all flamboyant, are ya?” I was like, “Yeah, Dad, I’m going to completely change. I’m going to start wearing leather vests. I’m going to get one of those haircuts that they all have.”

Time: Is being gay something you struggled with?

DeGeneres: No. I ignored it because I didn’t really know what it was until I was 18 years old. I dated guys. I liked guys. But I knew that I liked girls too. I just didn’t know what to do with that. I thought, “If I were a guy I’d go out with her.” And then I thought, “Well, I don’t want to be a guy, really.” So I went, “Oh, well,” and just went on with my life. My first gay experience was literally someone else’s idea–I was freaked out even by the thought of it. And I thought that was one experience and it was just her, and I started dating guys again, thinking, “Well, I just need to meet the right one.” Never could, really.