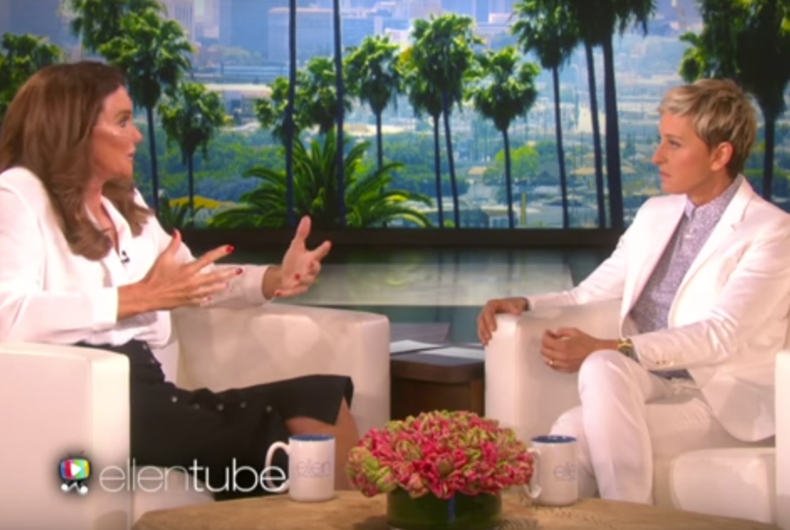 Caitlyn Jenner hasn’t exactly been embraced by the LGBTQ community. And while there are myriad reasons for that, Jenner lays at least part of the blame for her exclusion at the feet of Ellen DeGeneres.

According to Radar, which reportedly obtained a copy of Jenner’s soon to be released book The Secrets of My Life, Jenner believes the lesbian comedian and talk show host deliberately portrayed her as anti-gay, leaving out parts of their interview she claims would have painted a more accepting picture.

“I believed, as anyone would, that that was exactly what she wanted to talk about — my progression in terms of changing attitude over the years,” she recalls in the book.

In the televised portion of the interview with Ellen, Jenner explained that she used to think of marriage as meaning one woman and one man. Over time, she said, she began to understand why the word “marriage” was so important to supporters of marriage equality.

“At first, I was not for [same-sex marriage],” Jenner said. “I thought, I’m a traditionalist. I’m older than most people in the audience. I kinda like tradition, and it’s always been a man and a woman. And I’m thinking, I don’t quite get it.”

But over time, Jenner said, her views had changed.

“I don’t ever want to stand in front of someone’s happiness.That’s not my job,” Jenner said in the interview. “If that word ‘marriage’ is really, really that important to you I can go with it.”

“I can go with it” was apparently not the ringing endorsement of marriage equality DeGeneres would have hoped for. She called out Jenner’s lack of enthusiasm.

But Jenner didn’t do much to reassure her.

“I’m on board. It’s going to be pretty much the law of the land. So yeah, I’m ok with that,” Jenner said. “‘Cause I don’t want to stand in front of someone’s happiness.”

DeGeneres went on to explain why the word “marriage” matters, trying to draw a comparison to their parallel struggles for equality.

But then the video cuts to a different part of the conversation. Jenner claims in her book that she had more to say on the matter, but it was cut from the video to help it go viral.

“I am for it,” Jenner reiterates in her memoir. “I did not initially understand why marriage was so important, influenced not doubt by my own personal experience. Now I do, and it’s a wonderful thing to see.”

But DeGeneres went on to talk about their interview on “The Howard Stern Show,” characterizing Jenner as uncomfortable with marriage equality and gay people in general.

“This discussion further alienated me from members of the LGBTQ community,” Jenner alleges. “Ellen’s appearance on The Howard Stern Show, where in my mind she even more emphatically took what I said out of context, made it go viral.”

In the interview, DeGeneres suggested that Jenner wasn’t as accepting of same-sex marriage as she should felt a transgender person should be.

“You’re wanting people to understand and accept you, and this is really confusing to people,” DeGeneres said, “and you still have a judgement about gay people and marriage.”

When Stern asks if Jenner danced when she appeared on The Ellen Show, DeGeneres said she did not, and speculated it was because of her sexuality. In the end, DeGeneres confessed she didn’t really understand what Jenner was fighting for either.

If DeGeneres had replayed the tape of her interview with Jenner she might have realized they both want the same thing.

Time is running out for Vermont’s gender-free restroom bill