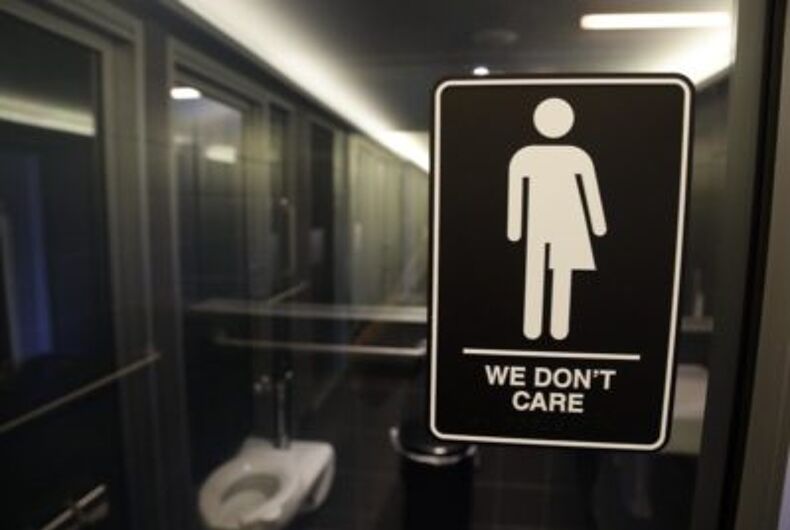 Vermont is moving ahead with a statewide measure to take gendered signs off single-occupancy public bathrooms, but time is running out to pass the bill during this year’s lawmaking session.

After an identical California law passed last year, nearly a quarter of Vermont’s 150-member House signed on as co-sponsors of the bill. New York is the only other state that is considering a similar legislation this year. A Hawaii bill in the same vein failed last year. Washington, D.C., and many cities and colleges have already enacted similar policy.

In contrast, 13 states were considering laws by late March that limit bathroom access in some way, according to the National Conference of State Legislatures. Policy experts say the bills are unlikely to pass, however.

“Trans people have reached a level of publicity and to some degree acceptance on the national scale that is unprecedented,” said Cathryn Oakley, senior legislative attorney at the Human Rights Campaign, a leading LGBTQ rights group.

“But it also has had a very significant pendulum swing in terms of the legislation we’re seeing,” Oakley said.

Capturing Oakley’s attention now is a Texas bill that would that would keep transgender people from using a bathroom that aligns with their gender identity, which has passed the state Senate.

Progressive Rep. Selene Colburn, the lead sponsor of the three-page bill, said she hasn’t faced opposition, but is not sure if it will pass this year. House and Senate leaders say about three weeks remain in Vermont’s lawmaking session, and neither the full House nor the Senate have yet considered the bill.

“I have no firm assurances,” Colburn said.

The bill is expected to pass the House Committee on General, Housing and Military Affairs, but at least one lawmaker on the committee said she is voting against it.

“I just feel like this shouldn’t be coming down through law,” said Rep. Vicki Strong, a Republican. Schools and state buildings and establishments are already enacting these policies on their own, she said, but others shouldn’t be forced to follow suit.

In 2016, North Carolina became the only state to successfully pass a law that required people to use the bathroom that matches the sex on their birth certificate and eliminated anti-discrimination protection for LGBTQ people.

Though Vermont’s bill was designed primarily as an inclusive measure, Vermont Rep. Bill Lippert, a Democrat, said during testimony Tuesday before the House Committee on General, Housing and Military Affairs that taking gendered labels off single-occupancy bathrooms is a practical, as well as an inclusive, step.

Lippert described a time when he was waiting to use an occupied male bathroom, while an unoccupied female bathroom was available just down the hall.

“I thought, should I, dare I?” said Lippert, a longtime advocate for LGBTQ rights. “And it suddenly hit me how this really is for the benefit of everyone.”

Over a dozen people who were invited to testify Tuesday spoke in support of the bill, some of whom identified as transgender or had a connection to the transgender community.

Costs to implement the law would be minimal, and business groups say they support the measure. The state would have to spend about $2,000 to change bathroom signs in government buildings, said Chris Cole, the state’s buildings and general services commissioner.

Caitlyn Jenner blames Ellen for her unpopularity in the LGBTQ community