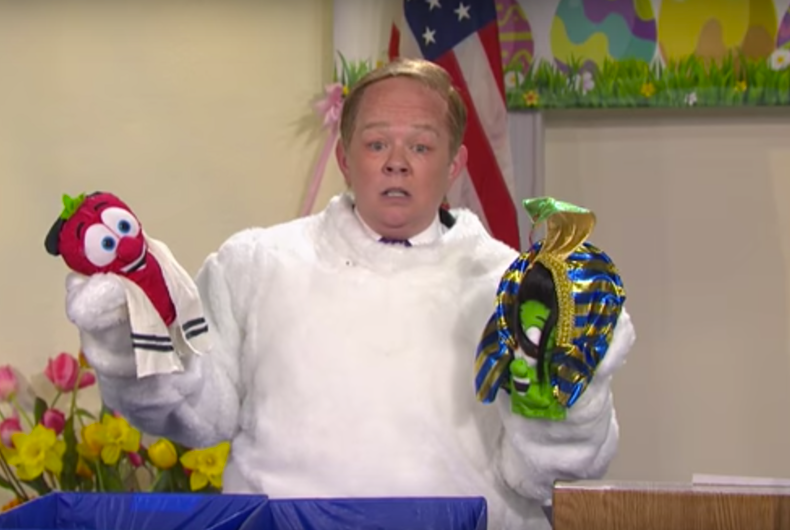 “It would be really great if the nitpickers could try to see the big picture, and didn’t solely focus on every little slur and lie I say,” McCarthy’s character says in the sketch.

Spicer has made numerous false claims, including the recent assertion that, unlike Syrian President Bashar al-Assad, Adolf Hitler ever used chemical weapons on his own people. (An assertion that somehow manages to overlook the fact that millions of Jews were killed with gasses in concentration camps.)

“Everybody freaked. They were all like, ‘Boo-hoo, what about the Holocaust centers?'” McCarthy’s “Spicey” explains. “And yeah, I know they’re not really called Holocaust centers. Duh. I know that. I’m aware. I clearly meant to say ‘concentration clubs.'”

So, “in the spirit of cultural unity,” Spicey  attempts to tell the story of the Jewish holy day Passover — which falls on the same day as Easter this year — using stuffed vegetable toys. In Spicey’s rendition, the word “passover” refers to the Jews literally passing over the head of the Pharaoh of Egypt, through the air.

He follows up with a ranking of bad guys to make clear he gets how evil Hitler was, only to end up returning to anti-Semitism in the end.

Finally, he signs off with a reminder that, given the growing tensions with North Korea, this is likely our last Easter on Earth.

On that note, watch the video below while you still can.

Yep, Ellen came out 20 years ago — and changed the world