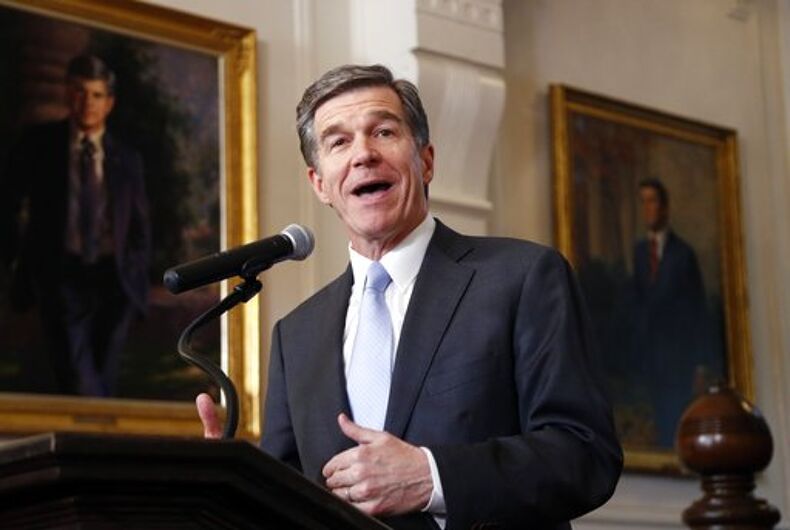 North Carolina Gov. Roy Cooper holds a press conference at the Executive Mansion in Raleigh, N.C., Thursday, March 30, 2017, to announce that he signed a HB142, a compromise replacement bill for HB2, that the N.C. General Assembly passed earlier in the day. Photo: Chris Seward/The News & Observer via AP

RALEIGH, N.C. (AP) — North Carolina’s deal to undo its “bathroom bill” is receiving both complaints and applause, along with one big vote of confidence that could pump tens of millions of dollars into the state’s economy.

The Atlantic Coast Conference announced Friday that it’s ready to start considering North Carolina again for its lucrative neutral-site championships. That’s a morale boost for a state that prides itself on college sports.

Some business leaders, including the state Chamber of Commerce and Bank of America, are praising the deal, but others, including IBM and the McKinney advertising agency, remain doubtful.

LGBTQ advocates, meanwhile, say the “reset” under House Bill 142 is not a true repeal, and still exposes lesbian, gay, bisexual, and transgender people to discrimination.

HB142 has eliminated HB2’s requirement that transgender people use restrooms corresponding to the sex on their birth certificates in many public buildings. But the new law also makes clear that from now on, only state legislators — not local governments or school officials — can make rules for public restrooms.

HB2 also invalidated any local ordinances protecting gay or transgender people from discrimination in the workplace or in public accommodations. HB142 prohibits local governments from enacting any new LGBTQ protections until December 2020.

The ACC pulled games from North Carolina last year and threatened to remove its 2017 football championship from Charlotte as well if HB2 remained on the books. Now the state’s largest city can look forward to the $30 million economic boost that game brings, and the ACC says the state “will again be considered for hosting” future games.

The NCAA, which also removed events from North Carolina, struck a more cautious tone on Thursday when its president Mark Emmert said the association will decide in the coming days whether HB142 represents “a sufficient change in the law.”

The new law was passed by the legislature and signed into law by Democratic Gov. Roy Cooper in a matter of hours on Thursday.

Mara Keisling, executive director of the National Center for Transgender Equality, complained that transgender people were left out of back-room negotiations on the deal.

“I don’t know why any of these people thought they could use the exact secret process and incompetence that got them into this problem to get them out of this problem,” she said in an interview.

The ACLU said it’s continuing its legal battle on behalf of transgender residents.

“Many of the provisions of HB142 carry forward problematic portions of HB2,” the group’s North Carolina legal director Chris Brook said. He said provisions such as the moratorium on local anti-discrimination ordinances “mirror provisions we’ve already sued over.”

The stakes are high. An Associated Press analysis this week found that House Bill 2 would cost the state more than $3.76 billion in lost business over a dozen years. The tally was based on companies and events that already backed out, meaning that money won’t likely return even with the 2016 law gone.

The North Carolina Chamber of Commerce thanked Cooper and Republican legislative leaders “for coming together on a bipartisan basis to find a solution.”

Bank of America, the largest North Carolina-based company, said in a news release: “We support this bipartisan measure to repeal HB2 and create the conditions for continued dialogue and progress.”

Other companies responded negatively, such as the Durham-based advertising agency McKinney.

“As a national agency with a global creative reputation, our success depends upon attracting the very best talent and clients to Durham. This new bill continues to stand in the way of that,” McKinney CEO Brad Brinegar said.

IBM, which has a large Raleigh-area operation, “opposed North Carolina’s H.B.2 because it discriminates against people for being who they are. We welcome its repeal, but stronger local nondiscrimination laws should not be pre-empted,” said the company’s chief diversity officer, Lindsay-Rae McIntyre.

Last year’s cancellations included a Greensboro concert by Bruce Springsteen. Asked if HB142 does enough to bring them back, the band’s guitarist Steven Van Zandt tweeted: “There is nothing I would like more,” but he called the repeal “phony.” ”They’re not fooling the NCAA or anybody,” he wrote.

Money and politics aside, transgender people remained worried about their safety.

Gilbert Baker, creator of the rainbow flag, dead at 65