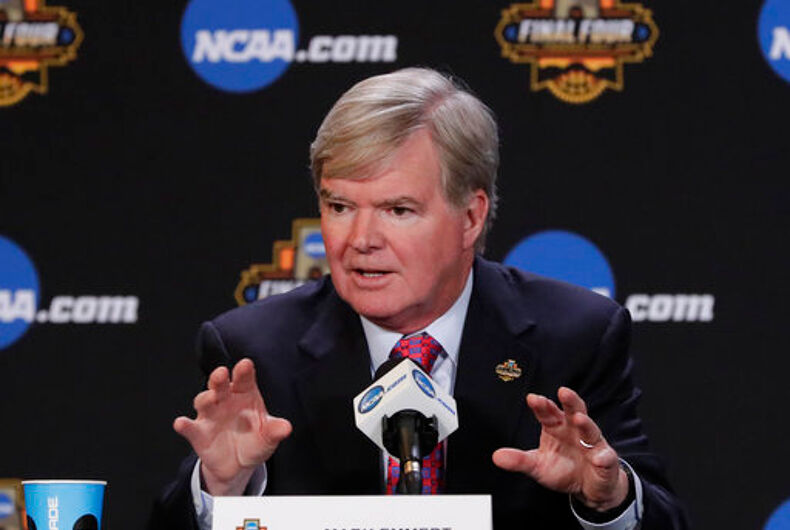 NCAA leaders need a few days to digest the new law that will replace North Carolina’s so-called “bathroom bill” before deciding whether to bring March Madness and other championship sporting events back to the Tar Heel state.

As for other potential political hot spots, such as Texas where lawmakers are considering a similar bill and where the Final Four will be next year, the NCAA is in no rush to weigh in.

A few hours before NCAA President Mark Emmert gave his annual pre-Final Four news conference Thursday, North Carolina Gov. Roy Cooper signed a bill that rolled back HB2. The law had required transgender people to use public bathrooms that correspond to the sex on their birth certificate. It also excluded gender identity and sexual orientation from statewide antidiscrimination protections.

The law prompted the NCAA, NBA, Atlantic Coast Conference and other businesses and popular music acts like Bruce Springsteen and Pearl Jam to pull out of North Carolina.

The new bill drops the rule on transgender bathroom use. But it says local governments cannot pass new nondiscrimination protections for workplaces, hotels and restaurants until December 2020. It has its critics. Gay and transgender rights activists complained that the measure still denies them protection from discrimination, and they are demanding nothing less than full repeal.

“I’m personally very pleased that they have a bill to debate and discuss,” Emmert said. “The politics of this in North Carolina are obviously very, very difficult. But they have passed a bill now and it will be a great opportunity for our board to sit and debate and discuss it.”

In response to HB2, the NCAA relocated seven of its sanctioned championship events out of North Carolina over the last year, including first-round games of this men’s basketball tournament being moved from Greensboro to Greenville, South Carolina.

Emmert said the NCAA’s board of directors — the association’s ultimate ruling body composed of mostly university presidents — will meet over the next several days with legal analysts. A decision about whether North Carolina sites will be considered as event hosts needs to be made by early next week, Emmert said.

Emmert said the NCAA delayed it site selection process for the 2018-22 cycle to allow North Carolina lawmakers as much time as possible to address HB2. The site selection committees began meeting this week and are scheduled to announce their decisions on April 18.

The Associated Press calculated that the state made $71.4 million from 28 neutral-site NCAA events in the five academic years ending last spring. A potentially more lucrative slate of events is in jeopardy in this latest round of decisions. The North Carolina Sports Association estimated the state risked more than $250 million in potential economic impact if 130 event bids submitted to the NCAA are declined.

The Atlantic Coast Conference also said it would not hold championship events in North Carolina because of HB2 and ended up relocating its football championship from Charlotte to Orlando, Florida, last year. The conference has decisions to make on future sites soon as well and Commissioner John Swofford released a statement similar to Emmert’s remarks earlier Thursday.

“The recently passed legislation allows the opportunity to reopen the discussion with the ACC Council of Presidents regarding neutral site conference championships being held in the state of North Carolina,” Swofford said. “This discussion will take place in the near future, and following any decisions by the ACC Council of Presidents, announcements will be forthcoming.”

Next year’s Final Four is slated for San Antonio. A similar bathroom bill is being debated in Texas but has not gained much momentum.

“The speaker of the house in Texas has opined he doesn’t think this is a good bill. He’s obviously a very powerful voice in this debate. So we’ll wait and see where it goes,” Emmert said.

He added: “Moving the Final Four is a very difficult thing to do, obviously. It’s not like moving a regional or a first or second round.”