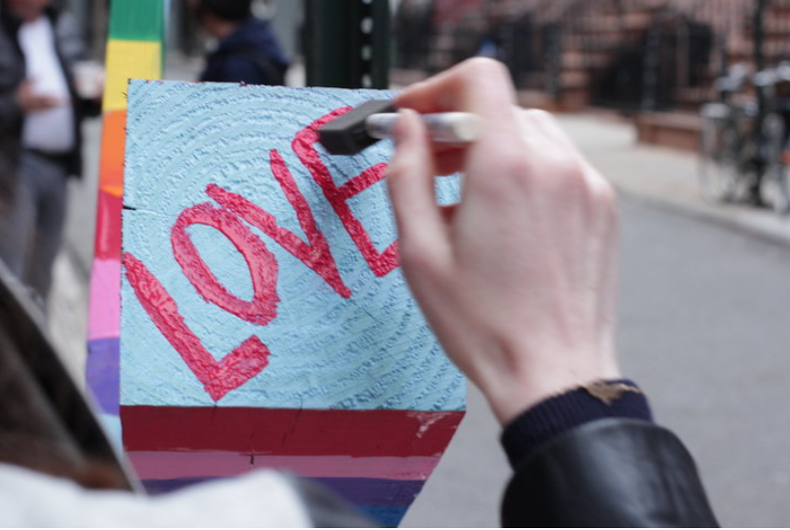 Two weeks ago someone chained a large cross to an apartment gate on Gay Street in New York City’s Greenwich Village. For over a week, the cross’s owner would come back every day and chain it to a different part of the street.

Residents say they don’t know what the owner was intending to say with the giant wooden cross. “To be honest, I’m a Christian, and the cross means love, peace and hope. And it was clear the owner of this cross did not share those values,” Gay Sreet resident Micah Latter told the Huffington Post.

Latter tried to get help to remove the cross from the authorities, but did not succeed. So she decided to make it obvious that the cross on their street was a symbol of love.

This past Sunday, Latter got together with 10 others to paint a rainbow on the cross.

“Neighbors and strangers came together on Gay St., all approaching the meaning of the cross with different personal views, yet we all shared the same love and support for the community that we bonded over,” Latter said.

The cross, which residents are now calling “The Love Cross,” was then chained by the residents so that the owner couldn’t move it anymore. They even put superglue in the owner’s lock to keep them from unlocking it.

The important thing was how the community came together. “For two hours on a Sunday, it was just random strangers, tourists, straight couples, gay couples, kids and neighbors spreading love, painting rainbows on a cross, getting to know our neighbors, and drinking champagne on Gay St. It was a magical NYC evening,” Latter said.

Story goes like this: 9 days ago an enormous cross showed up chained and locked to my apt gate. The mysterious owner of the cross has the key and moves it around my street (which happens to be Gay St). Confused by the mute point this stranger was trying to make with a cross on Gay street, my neighbors & I decided to turn the cross into a Love Cross. Strangers, family, friends, dogs, neighbors & random tourist all stopped to paint, drink champagne in the street and celebrate the cross that symbolizes love in the neighborhood. Plot twist: we added our own lock to the chained cross and superglued both key holes. #GayStreet #westvillage #LoveCross ?❤️✌?