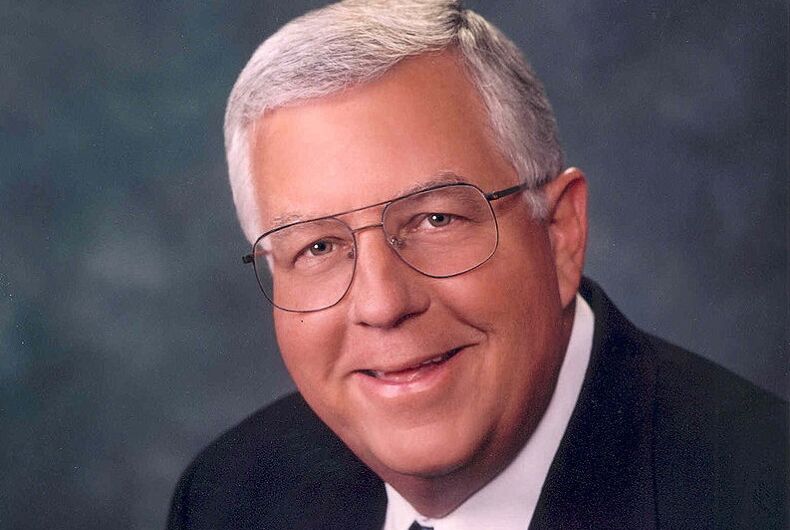 A Republican Senator said a man wearing women’s clothes in public “kinda asks” to get beat up when speaking with a group of students.

Senator Mike Enzi of Wyoming was talking with students from Greybull High School and Middle School when a student journalist asked him what work he’s doing to advance LGBT rights.

Enzi started with the usual conservative response that human rights should not be protected by the government. “There are a lot of problems that don’t have a federal, one-size-fits-all solution. Everything can’t be done by law; that’s one of the problems we have in this country, thinking that everything could be done by law. What we need to have is a little civility between people.”

Then he moved into a bizarre anecdote about someone who wears a tutu to bars regularly. “We always say that in Wyoming you can be just about anything you want to be, as long as you don’t push it in somebody’s face. I know a guy who wears a tutu and goes to bars on Friday night and is always surprised that he gets in fights. Well, he kind of asks for it. That’s the way that he winds up with that kind of problem. I’d be interested in any solutions that you have for how we can make that work better.”

Um, how about we start with elected officials taking assault seriously?

“The biggest thing that we need is civility,” he added after saying that someone deserves to get beat up because of the clothes they wear, presumably because Enzi has no idea what civility is.

Of course, this “guy” probably does not exist. It’s hard to see anything resembling an LGBT experience in what he says (we range from hyper-aware to paranoid about threats against us, not utterly clueless), and I can’t think of why someone would wear tutus to bars instead of more sensible women’s clothes.

Enzi’s story sounds more like a Fox News viewer’s idea of a transgender woman than an actual human being.

But it doesn’t matter. Even in his story, there’s no reason this person should be getting beat up because of what they wear.

This is exactly why the federal government has to step in when it comes to LGBTQ rights and protections: queer people in Wyoming have a right to live their lives without the constant threat of violence as much as anyone in California or New York, but people from certain states are more likely vote for elected officials who think that queer people are just asking to get beat up.

It is important that our students learn that the importance of respecting all people and how it is incumbent on those in the communities we live in to treat others as you would want to be treated. It is such a simple lesson ― it is never permissible to hurt another. Hatred in any form is destructive to the very foundation upon which our society is built.

No person, including LGBT individuals, should feel unsafe in their community. My message was intended specifically to be about promoting respect and tolerance toward each other. I hope if people look at the entirety of my speech, they will understand that. I regret a poor choice of words during part of my presentation. None of us is infallible and I apologize to anyone who has taken offense. No offense was intended. Quite the opposite in fact, and so I ask for your understanding as well.

Wyoming does not have anti-discrimination legislation, and Enzi has been a staunch opponent of LGBT rights in the US Senate, even going so far as to vote for a Constitutional Amendment to ban marriage by same-sex couples.

The context of Enzi’s comments aren’t “the entirety of [his] speech.” Instead, the context is a society where LGBT people face violence regularly and people like Enzi don’t take it seriously.

Would you vote for Caitlyn Jenner?

This neighborhood rallied together to thwart a Christian message of hate