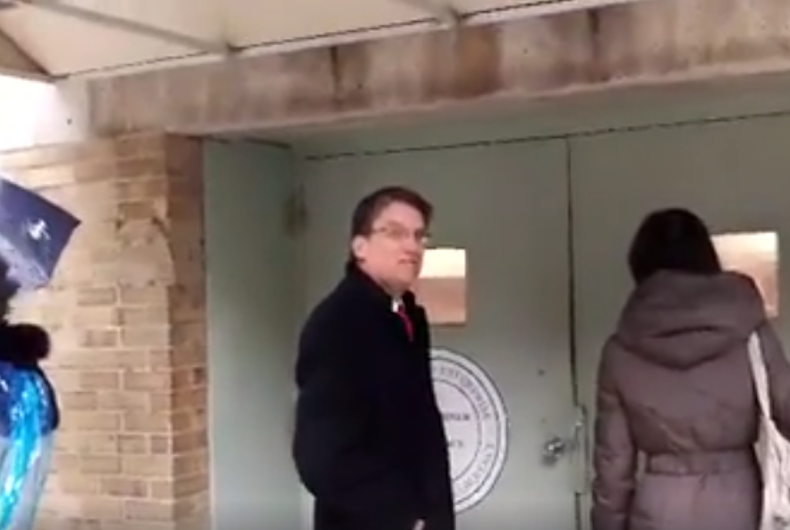 Former North Carolina governor Pat McCrory is not too popular in his home state these days, after costing the state millions of dollars and hundreds of jobs due to boycotts over the anti-LGBTQ law he signed while in office.

House Bill 2 (HB2), nullified non-discrimination ordinances across the state, forced transgender people to use the bathrooms and locker rooms matching the gender on their birth certificate in government-owned buildings, capped the minimum wage at a paltry $7.25 an hour, and took away the right to sue in state court for discrimination. The right to sue in state court was later reinstated by executive order, but the rest of HB2 has remained in effect.

The state failed to repeal HB2 after calling a special session with the consideration for repeal as the only issue on the docket.

Turns out McCrory is unpopular outside of his state as well, as a video posted Facebook user Udai Basavaraj shows. The video, tagged as being at the Capitol Hilton, accompanied by conservative pundit Lou Dobbs, finds the former governor doing his best to avoid a group of people shouting, “Shame!” and calling him an antigay bigot.

McCrory was being considered for a cabinet post, meeting with Donald Trump at Trump Tower in early December, but that failed to materialize.

“We got you now!” one person said as he waited for someone to let him into the building.

Eventually the police come to McCrory’s aid, pushing the crowd back.

Women’s March on Washington draws hundreds of thousands in D.C., around the world