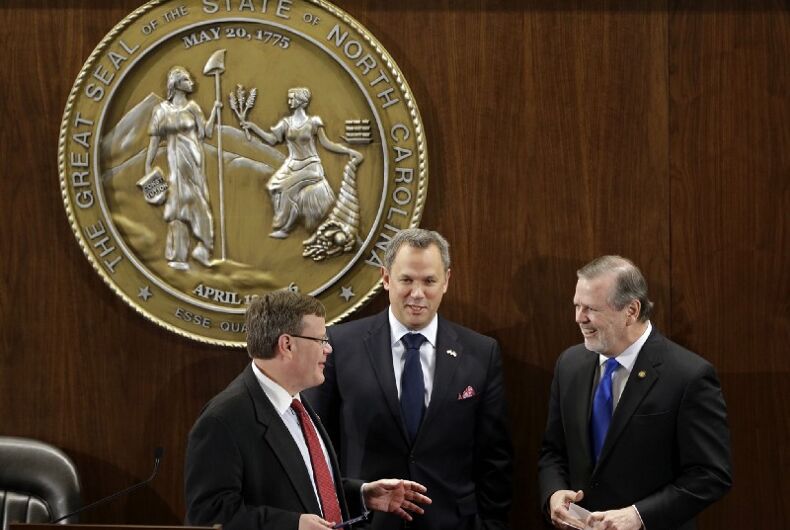 After hours of deliberation and debate during a special session on Wednesday, the North Carolina General Assembly adjourned without voting to repeal House Bill 2. The anti-LGBTQ law has cost the state millions of dollars and hundreds of jobs due to boycotts. The repeal was meant to bring an end to the economic suffering, but from the beginning there were signs of a lack of trust between the city of Charlotte and the state.

The plan was that Charlotte would rescind its expanded non-discrimination ordinance, which offered protections to the LGBTQ community, and the North Carolina General Assembly would vote in a special session to repeal House Bill 2.

Charlotte’s expanded ordinance, passed in February, protected the LGBTQ community from discrimination and allowed transgender individuals to use the restrooms and locker rooms matching their gender identity. The state responded with HB2, which nullified all ordinances passed by cities and municipalities, required trans people to use facilities matching the gender on their birth certificate in government owned buildings, capped the state’s minimum wage and prevented people from suing in state court for employment discrimination, since fixed by executive order.

Charlotte voted on Monday, reportedly at the urging of Governor-elect Roy Cooper, to repeal the portions of its ordinance made null and void by HB2. They left in protections for employees of business that contract with the state. That was also repealed by a city council vote earlier on Wednesday, which also removed the Dec. 31 deadline for the state to repeal HB2 lest the ordinance go back into effect.

Senate Republicans put forward a bill that would repeal HB2, but put in place a block on ordinances for six months. That later ballooned to the end of the 2017 session over concerns that six months wouldn’t provide a long enough time frame to come up with what Sen. Phil Berger described as a “long term” solution.

Democrats were outraged at the move.

“I’m sorry, this was not the deal. The deal was Charlotte repeals fully and we repeal fully,” said Sen. Jeff Jackson. “Charlotte was told over and over again, Charlotte, if you take the first step you will be met halfway. Charlotte did that and we’re being shoved away one more time.”

Sen. Buck Newton said the moratorium on ordinances was necessary because Charlotte couldn’t be trusted. He said it would prevent the “lunatic left of the city of Charlotte” from enacting an ordinance similar to the one passed in February.

“The problem was never the city of Charlotte, but Charlotte went ahead and did what your colleagues asked them to do,” said Rep. Chris Sgro, one of two openly gay members of the NCGA. “So if we adjourn, we’re clear permanently on the question of who is playing politics with the people of North Carolina, and it is not the city of Charlotte. It is this body, which has failed miserably in its leadership over the most important issue of the last 274 days.”

Both the House and Senate voted to do just that without a vote to repeal HB2.

“It is a shame that North Carolina’s General Assembly is refusing to clean up the mess they made. The support for the LGBT community from political leaders, faith leaders, businesses, and everyday people that has emerged this year will not fade. These attempts to expel transgender people from public life will not be tolerated,” said James Esseks, director of the American Civil Liberties Union’s LGBT & HIV Project in a statement. “The legislature may not be willing to undo their unconstitutional overreach and respect the rights of LGBT people, so we’ll just have to see them in court.”

“It is an outrage that North Carolina’s Republican lawmakers could not follow the mandate of the voters and repeal H.B. 2,” said Simone Bell, southern regional director at Lambda Legal, in that same statement. “As long as H.B. 2 is on the books, thousands of LGBT people who call North Carolina home, especially transgender people, are being discriminated against and will never feel safe. This was a counterproductive exercise in reaffirming to the rest of the country that North Carolina wants to remain mired in last year’s divisive dispute.”

“Their shameful actions and broken promises subject LGBTQ North Carolinians to state-mandated discrimination, contribute to a heightened environment of harassment and violence, and will continue the significant harm done to the state’s reputation and economy,” he added. “It’s clear today that the GOP leadership’s cruelty towards lesbian, gay, bisexual and particularly transgender North Carolinians knows no bounds. For our part, we will continue to fight to defeat all of HB2 and protect North Carolinians no matter what it takes.”

“Make no mistake: Roy Cooper and Senate Democrats killed the repeal of HB2, abandoning Roy Cooper’s commitment to avoid divisive social issues by shooting down a temporary cooling off period on ordinances like the one that got us into this mess last March,” Berger said in a statement. “Their action proves they only wanted a repeal in order to force radical social engineering and shared bathrooms across North Carolina, at the expense of our state’s families, our reputation and our economy.”