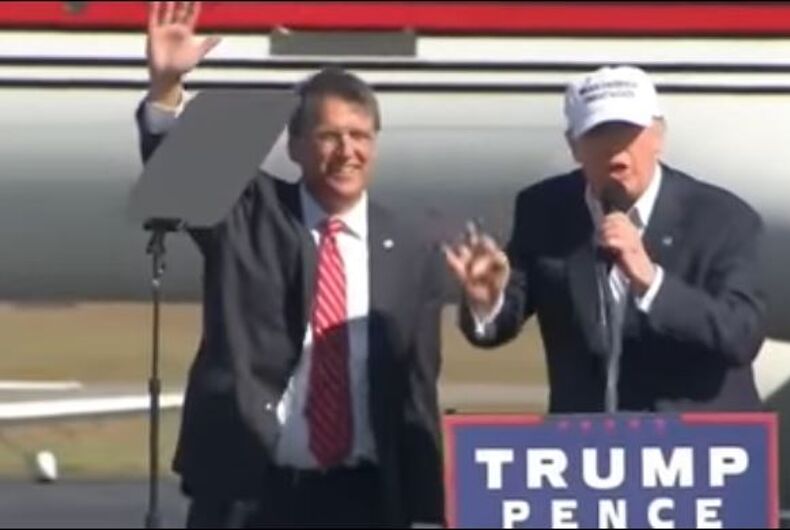 Donald Trump and Pat McCrory appear together at a rally in Wilmington.Photo: YouTube Screenshot

Pat McCrory conceded to Democratic challenger Roy Cooper in the North Carolina governor’s race on Monday, after stalling with recounts and claims of voter fraud.

He might not be out of a job for long, as it was announced today that he will be meeting with Donald Trump on Wednesday.

The Trump transition team made the announcement, with spokesman Sean Spicer saying the meeting will take place at Trump Tower in New York City. They provided no other information.

Before becoming governor, McCrory served on the Charlotte City Council and was the mayor of Charlotte for 14 years.

“This is the best of America,” he concluded, pointing at Trump.

He also made a habit of joking about the bathrooms at rallies, a nod to the unpopular bill he signed into law, House Bill 2 (HB2). The law requires transgender people to use the bathrooms and locker rooms matching the gender on their birth certificates.

Additionally, it invalidated nondiscrimination ordinances passed by cities and municipalities across the state, invalidating protections for the LGBTQ community. Boycotts over the law have cost North Carolina millions of dollars and hundreds of jobs.

McCrory was not the most vocal backer of Trump’s however, giving a lukewarm endorsement.

“I’ve stated that I would support the Republican nominee. Anything else?” he told the News & Observer in June when asked why he backed the candidate.

In October, he attempted to distance himself from the comments Trump made in 2005, bragging about sexually assaulting women.

I condemn in the strongest possible terms the comments made by Donald Trump regarding women. I find them disgusting.

McCrory had pushed HB2 under the guise of protecting women and girls from predators, making the remarks that much more damaging coming from a candidate he still proudly backed.

When asked if McCrory might have a spot in a his cabinet, Trump told the News & Observer, “Certainly, it would be something I’d consider.”

Prior to becoming a politician, McCrory worked in the private sector for the likes of Duke Energy and Charlotte-based Moore & Van Allen Law Firm.