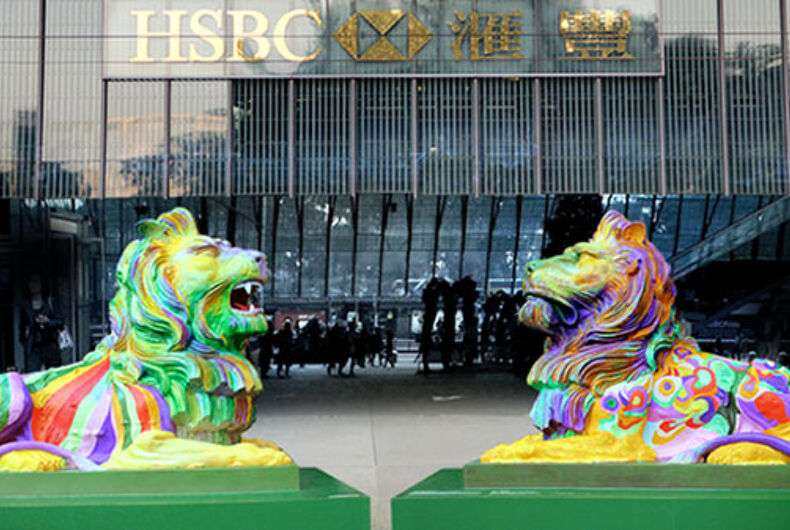 Two magnificent golden lions that drape the entrance to the HSBC offices in Hong Kong have been temporarily replaced by a pair of rainbow-striped replicas in support of the LGBTQ community. And as PinkNews reports, that is a really big deal for advocates, allies as well as antigay bigots who have petitioned to strip the plaza of the “disgusting gay lions.”

The organizer of the petition told the BBC why he finds them so objectionable: “The lions are an icon of Hong Kong,” said Roger Wong, from the Family Schools Sodo Concern Group. “A lot of Hong Kongers have a certain affection for them – and it’s not right that they are projecting meanings on to them, that a lot of people may disagree with.

“The male lions represent the stability and power of the bank. By adding a rainbow on the lions – does that mean they’re homosexual? I find that objectionable – and they don’t look that aesthetically good either.”

Here’s one of the originals:

And here’s a closer look at the replica rainbow lions that critics have denounced as an assault on “family values.”

The petition isn’t just limited to the lion display, either. The BBC says critics want HSBC to stop being so LGBTQ-friendly, claiming its policies are “not fair to the shareholders because it essentially forces every shareholder to endorse the homosexual lifestyle.”

As of Monday night, petition organizers claimed they had collected 1,800 signatures and vowed to protest in front of the lions if they collected 3,000, reports the South China Morning Post.

Hong Kong has laws prohibiting discrimination on the grounds of gender, disability, race and family status, but not sexual orientation.

Support for the rainbow lions has been overwhelming and almost universally positive on social media and among younger citizens. And if critics go through with their protest, they will have to find room in the crowd fed by a steady stream of tourists and others taking selfies in front of those brightly-painted brave beasts.