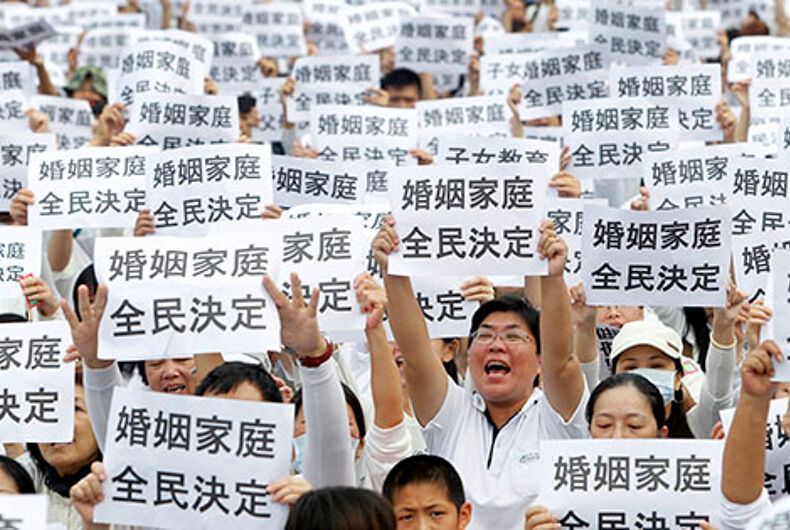 This report has been edited to note Taiwan’s government is pro-marriage equality.

A massive rally in Taiwan’s capital city Saturday drew tens of thousands of demonstrators, wearing white, singing songs and dancing, and waving signs which called for a referendum on same-sex marriage and parental control over education.

The anti-marriage equality forces, known as the Coalition for the Happiness of Our Next Generation, organized the protest against Civil Code amendments that would legalize same-sex marriage. They also claim the amendments will advance what the Tapei Times called “a pro-homosexual curriculum,” and they are demanding that it be “driven out” of schools.

Organizers claim 80,000 people attended the Taipei rally, with another 90,000 demonstrators in Taichung and Kaohsiung.

The protests were largely targeted at denouncing one person: Democratic Progressive Party Legislator Yu Mei-nu, one of the main sponsors of the amendments to the Civil Code.

“We oppose homosexual marriage being amended into the Civil Code because the family system comprised of marriage between one man and one woman is the foundation of society, and if you damage it, that will lead to marriage, family and the structure of society being completely wiped out,” said alliance spokesman Chu Wu-hsien, according to the Times.

Chinese Regional Bishops’ Conference secretary-general Otried Chan told the paper: “Every person has a right to love, but there is also a proper order to love: We do not use the same manner to love animals as people, and love for a husband and wife is different from how you love friends.”

There were smaller counter-protests in favor of same-sex marriage Friday and Saturday.

As Nikkei’s Asian Review noted, President Tsai Ing-wen, who came into office in May, supports legalizing marriage rights for all citizens. She even appointed a trans woman to the post of minister. Taiwan’s Pride parade in October attracted a record 80,000 participants from across Asia.

The head of an organization that promotes LGBTQ rights, Hsu Hsui-wen, told the Asian Review the opposition to same-sex marriage and civil rights appears to have come together only now that marriage equality is on the brink of certainty. If enacted, Taiwan would be the first nation in Asia to allow same-sex marriage.

This demonstration against Taiwan’s LGBTQ community comes just days after President-elect Donald Trump violated decades of diplomatic protocol with the island nation. U.S. government severed official diplomatic relations with Taiwan in 1979, and up until Trump, no elected leader of the United States has spoken with Taipei since. Trump broke that tradition last week by accepting a congratulatory call from President Tsai Ing-wen, and strained American relations with China, which claims Taiwan as its own. It’s not clear if Tsai Ing-wen and Trump discussed marriage equality, which the president-elect last month declared “settled” by the U.S. Supreme Court.

Watch a video from ABC News via YouTube, below.