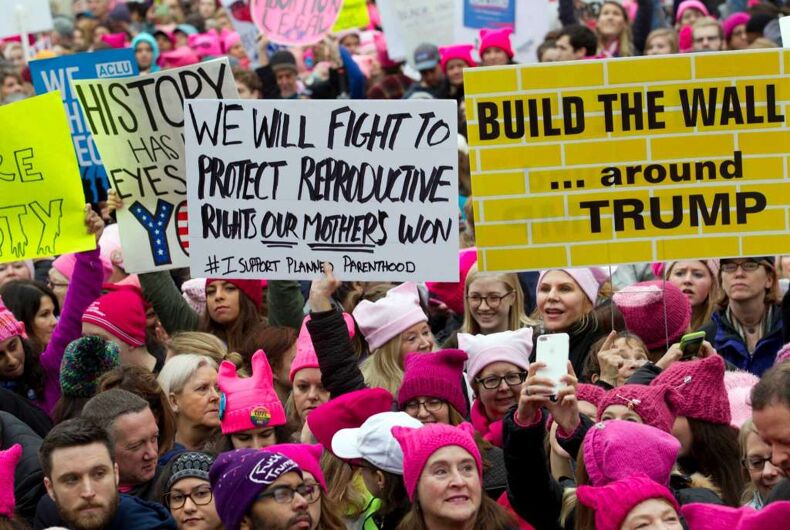 Massive crowds turned out for the Women’s March on Washington in D.C., as well as in sister rallies throughout the world, on Saturday. There were over 600 sister marches, all across the globe.

In D.C. the crowd was so big that they couldn’t march to the White House as planned, as they were packed together making movement difficult.

Speakers and musicians took the stage, including actor Ashley Judd, who told the crowd women’s genitals are “ain’t for grabbing.”

She condemned the new administration for “Shaming the gay out of America, turning rainbows into suicide notes.”

“I am not as nasty as racism, fraud, conflict of interest, homophobia, sexual assault, transphobia, white supremacy, misogyny, ignorance, white privilege,” she added.

Filmmaker Michael Moore, who hosted an anti-Trump rally in front of Trump Tower the night before the inauguration, was also on hand, urging people to run for office.

“This is not the time for shy people,” he said. “Shy people, you have two hours to get over it.”

Actor Scarlett Johansson said that while she normally wishes to keep a low profile on her personal life, “I feel that in the face of this current political climate, it is vital that we all make it our mission to get really, really personal.”

She then shared the life-saving experiences she and friends have had at Planned Parenthood.

“There are real and devastating consequences to limiting access to what should be considered basic healthcare,” she said.

Actor and activist America Ferrera said, “We will not go from a nation of immigrants to a nation of ignorance.”

She said that Trump would like us to forget the words inscribed on the Statue of Liberty, “Give me your tired, your poor, your huddled masses yearning to breathe free, and instead take up a credo of hate, fear, and suspicion of one another.”

“But we are gathered here, and across the country and around the world today, to say, Mr. Trump, we refuse. We reject the demonization of our Muslim brothers and sisters. We demand an end to the systemic murder and incarceration of our black brothers and sisters. We will not give up our right to safe and legal abortions. We will not ask our LGBTQ families to go backwards,” she added.

Madonna asked the crowd if they were “ready to shake up the world.”

“It took this horrific moment of darkness to wake us the fuck up,” she said. “It seems as though we had all slipped into a false sense of comfort, that justice would prevail and that good would win in the end. Well, good did not win this election, but good will win in the end.”

Watch the full event below.

Watch a roundup of protests around the world, in cities like Melbourne, London, Paris, Berlin, and Tokyo, below.