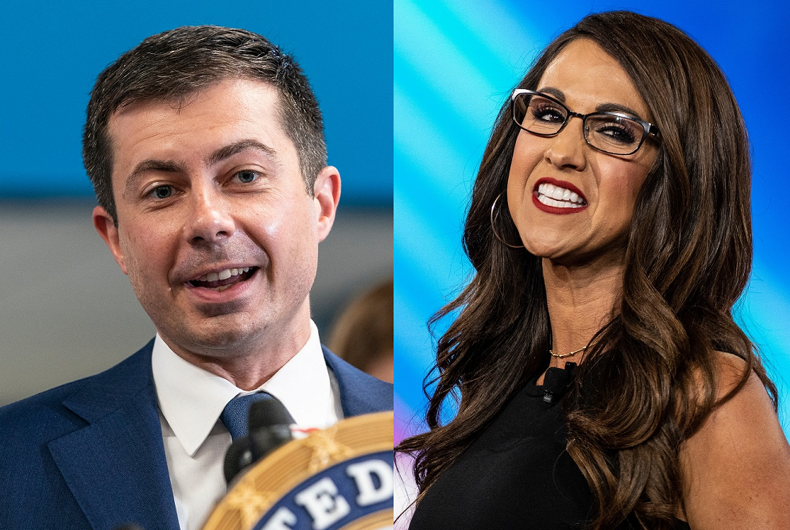 On Tuesday night the Federal Aviation Administration’s (FAA) Notice to Air Missions system  (NOTAM) suffered an outage that lasted until Wednesday morning. The safety system was restored that morning.

It’s currently unclear what caused the technological issue and Buttigieg said that the Department of Transportation is investigating.

“There is no direct indication of any kind of external or nefarious activity, but we’re not yet prepared to rule that out,” he said on MSNBC yesterday. “We need to understand whether this reflects a systemic issue, and what would be required so that there’s no single point of failure here.”

“Glitches or complications happen all the time, but we can’t allow them to ever lead to this level of disruption.”

But Boebert had already decided what the cause was: Buttigieg himself.

“Every plane in America is currently grounded due to a system error,” she tweeted. “Mayor Pete, bravo.”

“This is what happens when you hire clueless liberals for jobs they aren’t qualified to do.”

Every plane in America is currently grounded due to a system error.

This is what happens when you hire clueless liberals for jobs they aren’t qualified to do.

This isn’t the first time she has attacked Buttigieg. In 2021, she said, “You can’t celebrate Christmas this year” because of Buttigieg, referring to supply chain issues that were partly caused by the COVID-19 pandemic.

That same year, she bragged about giving birth to one of her children in a truck to mock Buttigieg for taking paternity leave to be with his children.

“The guy was not working! Because why? He was trying to figure out how to chestfeed,” she said, using a term often used by transmasculine and non-binary parents. “Maybe someone should tell him, please, so he can get back to work.”

Last year, though, she was writing letters asking Buttigieg to approve grants for her district.

On Twitter, Boebert – who dropped out of high school and got her GED just months before winning her first election in her 30s – faced criticism for calling the Rhodes Scholar and first out LGBTQ+ cabinet secretary “clueless” and unqualified.

Several people mentioned that her gun-themed restaurant Shooters – which has since closed – gave 80 people food poisoning when they sold food at a rodeo without a license in 2017. Pulled pork sliders that weren’t stored at the appropriate temperature were found to be the culprit.

I know you aren’t running your mouth about unqualified people in jobs.

Hiring a clueless wingnut is certainly paying off for your constituents, you psychopath

The restaurant you run gave half of your town diarrhea, your husband is banned from all bowling alleys because he shows his junk to minors, and you have to take off your shoes to count to 20.

Maybe sit this one out on being qualified for anything.

No she can’t. It’s all attention grabbers have. Comes from low self esteem and a lack of confidence.

Self awareness isn’t really your thing, I guess.

So I guess bravo, Mayor Pete, for getting a system meltdown addressed and fixed quickly? https://t.co/ThT7RY2wmO

And what were you’re qualifications again Congresswoman that doesn’t understand how bills become law? How is this @SecretaryPete fault? The FAA is funded by Congress, your organization.

You should storm the FAA with trump flags

High-school dropout with two failed businesses—one of which food-poisoned 80 people in 2017—has notes for high school valedictorian, Rhodes Scholar, and military-intelligence veteran about job qualifications.

Now give us all a tweet about how you love Christ and how the Lord guides your behavior.

You barely got re-elected. Shut up! Sit down!

Are you under the impression that the Secretary of Transportation is also tech support for the FAA?

Maintaining a nationwide flight management system is harder than serving a tray of pork sliders, princess.

GOP lawmaker is disguising a trans healthcare ban as a conversion therapy ban. Will it work?