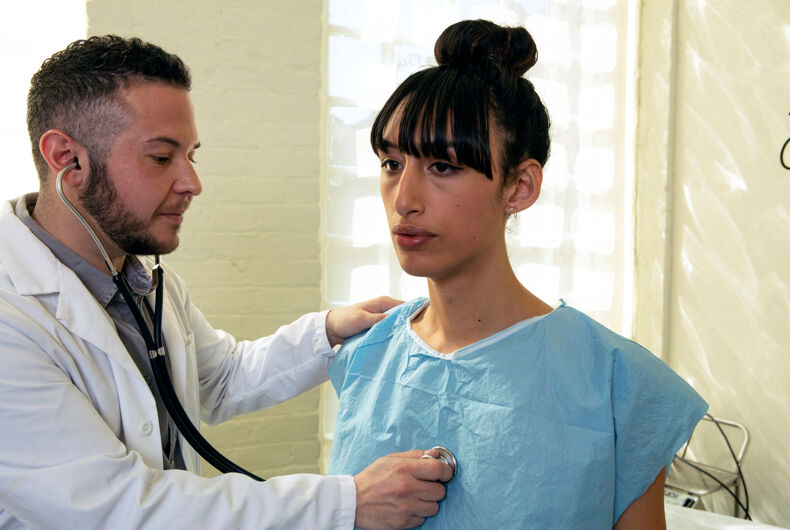 An Indiana state Republican has introduced a bill that, at first glance, seems to ban conversion therapy. But a closer look reveals that it’s actually just a bill seeking to ban gender-affirming care for transgender youth. It’s also designed to trick Democratic lawmakers into supporting it.

Indiana state Rep. Lorissa Sweet (R) has introduced H.B. 1118, a bill that prohibits healthcare professionals from “subjecting a minor to certain activities that purposely attempt to change, reinforce, or affirm a minor’s perception of the minor’s own sexual attraction.”

This sentence makes it sound like H.B. 1118 would ban conversion or reparative therapy, a widely debunked and pseudoscientific form of psychological torture that purports to change a person’s sexual orientation. Most major American medical, psychological, and pediatric groups have disavowed the practice as harmful and ineffective.

However, Sweet’s bill never mentions the phrase “conversion therapy.” Also, her bill would ban any attempt to “change, reinforce, or affirm a minor’s gender identity when the identity is inconsistent with the minor’s biological sex.” In other words, the bill would ban gender-affirming healthcare for transgender youth.

Sweet’s intention becomes clearer in two of the bill’s latter sections. One section bans a variety of gender-affirming surgeries that aren’t typically performed on minors. Another section specifically lists puberty blockers and hormone therapy among its prohibited actions.

Here’s where the bill tries to trick Democrats into voting for it. Its prohibitions on gender-affirming medications are listed alongside other brutal practices that neither any medical provider nor legislator would ever find acceptable. These include electrocuting a person’s genitals, wrapping their hands in heat coils, giving them an ice bath, and injecting them with vomit-inducing drugs.

In essence, Sweet’s bill dares Democrats not to vote for it. After all, on its face, it’s a bill against conversion therapy, something that Democrats have already helped ban in 25 states and 110 U.S. cities. No Democrat would ever vote against a bill banning conversion therapy or electrocuting a kid’s genitals, right?

But all the brutal practices mentioned in the bill are already forbidden by state law and the ethics guidelines of state medical licensing boards. As such, Sweet’s bill isn’t really trying to make these things even more illegal. She has merely disguised a trans healthcare ban as a conversion therapy ban — and Democrats shouldn’t take the bait.

“The clear play that Republicans are making is in claiming that Democrats who vote against this bill are voting against physical conversion therapy bans,” journalist Erin Reed points out. “Republicans clearly think that they can shield themselves from claims that they are in favor of conversion therapy with a bill like this. We must not allow them to hide behind attacking trans people and playing political games with LGBTQ+ kids.”

The bill uses a political tactic increasingly used by trans-exclusionary radical feminists (TERFs), like Irish journalist Helen Joyce. These TERFs claim that gender-affirming care is a form of conversion therapy, Reed says. This claim distorts the public’s understanding of what conversion therapy actually is.

Conversion therapy seeks to change an individual’s self-determined sexual orientation or gender identity from LGBTQ+ to a heterosexual or cisgender identity. TERFs and anti-LGBTQ+ advocates dishonestly claim that queer people and medical allies are pressuring, “indoctrinating,” and “grooming” children to identify as queer, but this is a sham claim that ignores the many ways that mainstream institutions already pressure queer people into hiding or changing their LGBTQ+ identities.

“Nobody is giving a minor gender-affirming care in order to change their sexuality,” Reed wrote. “Sexual attraction and gender are entirely separate things, and many transgender people identify as gay or bisexual post-transition. If transition is a form of conversion therapy, it is a laughably ineffective one.”

The bill calls upon “any individual” who suspects that a minor has been subjected to such activities to contact child abuse services or local law enforcement agencies. This encourages random people and educators to essentially snitch on any parent helping their kid access gender-affirming care.

This effort is similar to other states’ attempts to redefine gender-affirming care as a form of child abuse, something that Texas has illegally tried to do. If a trans-supportive parent is found guilty of child abuse, they could be placed on a child abuse offender registry and have their own kids taken away from them.

Any medical professional who prescribes gender-affirming medications could be sued by any individual, their parent, or guardian up to 20 years after the fact. This would allow any parent upset with their child’s transition to sue any medical professional who helps aid it, even after their child is an older adult. This also contradicts the best practices of all major medical associations which say that puberty blockers and hormones protect trans youth’s mental and physical well-being.

Prosecutors would also report offending healthcare professionals to state health licensing boards to consider disciplinary actions against them. Offenders could be prosecuted for child abuse, a level five felony in state law.

Unfortunately, Sweet’s bill could become law, even if Democrats don’t support it, since Republicans control both the governor’s seat and both chambers of the General Assembly. Even if Indiana Gov. Eric Holcomb (R) vetoes the bill, the legislature could override his veto, just as they did with a trans youth sports ban the state passed in 2022.

Nearly 20 percent of U.S. states will introduce legislation to ban gender-affirming healthcare, according to The Hill.